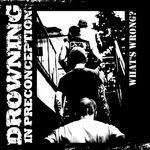 If you want some in your face hardcore without too much distraction Drowning In Preconception is happy to provide that. The self-released debut ep ‘What’s Wrong?’ contains 5 songs of straight up heavy hardcore that takes cues from bands like Terror, Since The Flood or old Hatebreed. With their heavy ass guitar riffs and drummer that like to double bass the shit of each breakdown, you kind of know what to expect. And that is not a bad thing in my book. Although the album does not blow me away by any means, it’s still a solid listen.

I am definitely enjoying songs like Through Thick And Thin cause they’re catchy and got good sing along parts. While the band lacks the knack of their influences, they use their skills to the best of their ability.

Drowning In Preconception knows this style is meant to be played aggressive but the delivery could be a little bit sharper. It sounds good, but lacks something like a real sense of punch or force. Somehow I expected more political-driven lyrics, but most of the songs deal with personal stuff like friends and hardcore scene. They sound honest and not forced so I hope they get a lot of sing-alongs when playing this shit live.

Overall, the band may not break new ground, but these songs are still a decent listen, probably even better when enjoyed live. Props to the band for taking matters in their own hands and releasing this stuff themselves.