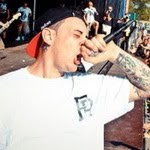 Singer Ajay Jones quits Brutality Will Prevail cause he's tired of playing in a sellout band for the hipster crowds. He made things clear in a post on his tumblr account where he explains what a joke this band has become. Check it out and props to Ajay for having a balls to do this.

Official statement:
“Before the rumours start, I want to nip it in the bud so there are no questions later;

I am no longer a part of Brutality Will Prevail.

When I put this band together, it was never meant to be a full time band and something to try make a living from. For me, we were always a hardcore band, working hard and doing everything on our terms to open opportunities, we’ve been able to travel, enjoyed a lot of support and I feel we’ve had a lot to be grateful

This was never meant to be a job, it was just 5 friends having a laugh, and that was alright with me. I thought we did that well.

In recent months this has changed a lot, mistakes have been made and things changed from being 5 friends in a hardcore band having some fun, to becoming a money making scam and exploiting the kind support we’ve received to date as a stepping stone to “bigger” things.

The opportunity to travel is always cool, but I am not comfortable with using the hardcore scene, and use the band for a holiday. for me i care about the band to much to just abuse it, i have a good life in South Wales/job/house.Why would i give that up, go back on every thing iv said and sang about just to be a”rockstar”for 5minites.

I really thought i had 4 good friends, but time has shown that we are not the friends I thought we were.

I’d like to thank everyone who has supported me during my time in the band, it is much appreciated more than I can ever say,Ill still be doing purgatory records, and hope to see you all soon with some new projects.”