Review: Manu Armata - From the Heart in Your Face 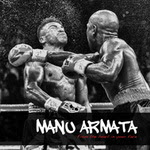 Manu Armata hails from Netherlands and been around since 2007, having already put No Victory Without Strife ep which you still can download from band’s website totally for free. It sucks that I missed this band when they played in Warsaw, especially when I know how good this new EP! 4 tracks and each one is nothing but display of alpha-male in-your-face hardcore. The band wastes no time for bullshit and kicks the shit off straight from the first seconds. Most of the time the tempos are fast with beefed up riffs and forceful vocal delivery, but all the must-have shit like gang vocals and breakdowns are present as well.

The band stays focused on the right elements throughout all of the four tracks so it’s hard to pick up the best one. But if I had gun to my head I would say Unworthy, mostly because of its slick thrash feeling that makes it so badass. I have no idea if that ep was released on any physical format, but since it’s just four tracks it would be nice to have it on 7”.