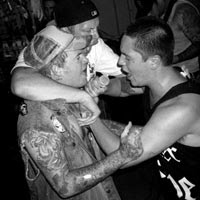 If you follow this blog you’re probably familiar with Hammerfist as they already been featured here couple of times. I caught up with them again as their new album called Isolation has just hit the streets. The album, put out by Ghost Town Records, brings five tracks of that heavy aggressive shit the band is known for. After couple of listens I have to admit it’s probably the best stuff they ever recorded. Make sure you check it out! And see what they got to say about the new songs, the scene in Cali and other more serious topics.

If you follow this blog you’re probably familiar with Hammerfist as they already been featured here couple of times. I caught up with them again as their new album called Isolation has just hit the streets. The album, put out by Ghost Town Records, brings five tracks of that heavy aggressive shit the band is known for. After couple of listens I have to admit it’s probably the best stuff they ever recorded. Make sure you check it out! And see what they got to say about the new songs, the scene in Cali and other more serious topics.

How did the October tour with CDC, Domination and Knuckle Up! go? What were some of the highlights of the tour? Any crazy stories from the road?

Jon: The October tour with CDC, Knuckle Up!, and Domination was awesome. We covered a lot of California with those guys. It went really well and we made some new friends along the way. Vegas was insane with the Knuckle Up! dudes. We had a blast trashing the strip.
Jake: The tour went great. The guys in Domination, CDC, and Knuckle Up! are great guys. We got to make some good friends. The shows were awesome. We had a great time in Vegas and tore up the strip. A lot of drinking went down. haha

Apart from the tour, let us know what’s been happening with Hammerfist since the Dead Dreams came out?

Jon: Since the October tour we have added a second guitar player to HF. We have been staying busy. We just recently finished up doing a run in Japan the past December. We got another tour coming up with Murder Death Kill and Merauder on the West Coast. We will also be playing this year's Slam Fest. We will be touring the East Coast this spring, and hopefully Europe soon.

Jake: We recently went to Japan for a week and played some really rad shows over there. We played Tokyo, Yokohama, Niigata, Nagoya, and Tokyo. All the shows were great. Amazing culture and an amazing race of people. Very welcoming and very helpful despite the language barrier at times. Our man Tohru Saito from Caboose Records put the whole thing together for us. Many thanks to him for helping us out!!! Jon: The Japan tour was absolutely great. We are already setting up a tour to go back hopefully in October. We will be looking to get out to Europe hopefully this summer.

So you guys just recently wrapped up recording your new album? When’s it coming out, what label is putting it out? Does the album have any title already?

Jon: The new HF ep will be titled "Isolation." It will be released in Japan on Caboose Recordings, Europe on Rucktion Records, and in the States on Ghost Town Records. We will also be printing limited edition 7" of this record this time around.

Jake: The new record is complete and dude for release in the end of march. The record is titled Isolation. It is a reference to us. Being isolated in and environment, state of mind, situation, anything that the listener can relate to. In regards to the band, it is a reference to us being isolated in the particular hardcore scene we are in. We do not fit in with the current sound that is overflowing Southern California right now. We also receive very little help from the United States hardcore scene as a whole and have been forced for many years now to depend on ourselves for everything we have needed. We have done well for ourselves despite the isolation. The record is being released in Europe through Rucktion Records, Japan through Caboose Records, and domestically through Ghost Town Records. We are very excited to be working with such great labels. 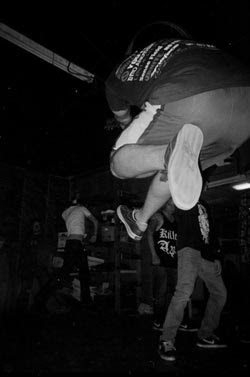 In your own words how would you describe the sound of the new album? Does the new material follow a similar style to the recently released Ultima Thule track?

Jon: The the record sounds nothing like anything we have done before. We really branched out on this record in comparison to the "Dead Dreams" ep. When we were writing these songs, we took our time and really pushed ourselves. The record itself is not terribly short but it is a very fast listen. I believe the ep clocks in at around 12 minutes total, but when you listen to it, it will seem like it ends in 5. It is a hard hitting record, but will keep the listener on their toes for sure.

Jake: The sound is a mature Hammerfist. The idea is to keep progressing with each release. I do not want to do another Dead Dreams. That record is great. Can we do better? yes, and I think we have with Isolation. The idea is to maintain the sound that gained our initial fan base. I never want to stray from that sound because then that original group of people that helped get us here will feel left behind. I know because I am a fan of bands as well and am always disappointed when bands I love drastically change their sound from record to record. Isolation is a logical progression for us and I think the listeners will be satisfied with the end result.

You’ve been in a band for quite a time already. As people get older, their priorities or ideas change. Has the way you run the band changed since you were starting out? Is there anything you would do differently?

Jake: My brother Jon and I have been in HF since 2004 I think. I have definitely changed a bit and so has every other member of the band in their own way. We have all gotten smarter and more focused on the reason we are all here: to make music that will stand the test of time. I'm very proud of the way the band has progressed. I have stepped down as the main contact and moved to the side. My brother has taken over running the band and HF has never been better. We all have jobs and we are still committed to making music and playing when we have the opportunities. I'm almost 30 and I still need this in my life.

When you think about hardcore scene right now, what are the main things that bother you?

Jake: I think a large problem is image. People in the scene are consumed by the notion that they need to portray a certain image, sound, style or anything to fit in and be accepted. That is crazy to me. I was drawn to the hardcore scene because I did not fit in with contemporary society. I could be myself in the hardcore scene and was accepted for who I was. Now, most people are chameleons. They change their colors at will to be accepted by whatever trend is popular at the time. On a personal note, I hope the trend of young men in the hardcore scene tattooing their hands, neck, and faces FIRST, dies soon. I would also like to see the obsession with Sons of Anarchy to go away. I dislike how most every band sounds the same and I dislike the amount of brown-nosing that bands do to get on these Fests(which have the exact same bands every time). Not our style and if that is cool, then we will stay the way we are.

There is so much quality hardcore music coming out California nowadays. Why do you think that is and what are your favorite bands from over there right now?

Jake: I am going to disagree with you on that. I love a lot of bands from Cali, example: Alpha and Omega, Donnybrook!, Creatures, Xibalba, Nomads, and Sleepwalkers. There are great bands that come out of Southern California. But there are so many bands that sound quite generic, predictable, and easily forgotten.
This is a random question, but what are your favorite hardcore albums of all time?
Jake: Hoods/Time the Destroyer, Knuckledust/Time Won't Heal This, 100 Demons/ In the eyes of the Lord, Hatebreed/Satisfaction is the Death of Desire, Earth Crisis/Destroy the Machines

Is there any hardcore song you wished you made?

Jake: No. I'm proud of the songs that Hammerfist has made. 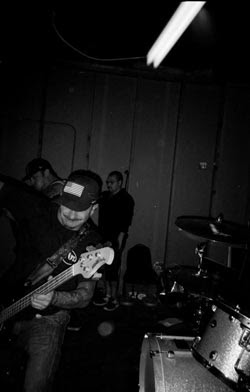 With all that crazy shit going on in the world today in terms of economy, what's your outlook on current situation? How do you think things will go in 2013 and beyond?

Jake: Things will keep going as they are. Corrupt politicians will continue to ruin this nation for their own personal gain. I personally will do what I always do: work hard. We have become a nation and scene(in the US) of people with their hands out waiting for what will come. The concept of working hard has become lost to us and it frightens me for the future. I will be unaffected because of the industry I am in and will not be hurt by others' weakness and apathy. I will continue to strive forward and constantly set personal goals for myself in both the hardcore world and work realm. Thank you.

Do you have any hope that the situation will eventually get better?

Jake: I do not feel the situation will get better anytime soon. The powers that be will continue to do what is in their best interest and the rest of us will be left to fend for ourselves. What is truly needed is not feasible or even realistic. Balance needs to be restored, and I feel that the only way to restore that balance is with violence. Massive amounts of extreme violence to rid ourselves of the oppressiveness of D.C. lawmakers. They have no fear of the people and they should. The people will continue to get pushed and one day the breaking point will be reached and the violence will erupt.

Do you consider yourself politicaly conscious person? Do you follow what’s going on in politics or vote?

Jake: I am political, however I do not share the same views as any one party. I have my opinions and keep myself involved in issues that will affect me directly. I do what I can to implement the changes necessary to benefit me. I do vote as well. It does not make a difference though but I like it.