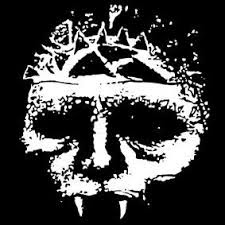 Official info: The injustices of humanity and the demise or mankind will be exploited once again by the entity known as INTEGRITY this Spring as the legendary outfit prepares to assault the planet with a new LP to be released through a joint collaboration with A389 Recordings and Magic Bullet Records.

Hellion has stripped the birthing process of Integrity’s output to even more cult depths, and for the past five years and all micro releases within, has musically collaborated with multi-instrumentalist Robert Orr alone. Taking past trades forward and culminating those staples with newer practices, Hellion and Orr’s latest effigy has been carved, and on June 11th — the vinyl pressing A389 and the CD via Magic Bullet — Suicide Black Snake will deliver the endtime yearnings of the longtime Integrity message into the general public like never before.

Integrity will embark on an extensive tour offensive leading up to and straight through the release of Suicide Black Snake. The action begins with a one-off in New Haven, Connecticut May 23rd alongside Overcast. The next two days will take the band’s wrath to our northern allies to the first time ever as the A389 Canadian Invasion slams Montreal and Toronto. Support from Homewrecker and Ilsa will be provided for all three of these shows. Directly following the Canadian Invasion Integrity will take part in the massive annual Maryland Deathfest in Baltimore, performing the final night of the gala with Ascension, Carpathian Forest, Exodus, Glorior Belli, Pentagram, Sleep, Venom, Citizens Arrest, Converge, Magrudergrind and more. A brutal tour through the Southeast states with Gehenna and Full Of Hell follow, as all three acts trek to Chaos In Tejas alongside Bolt Thrower, Final Conflict, Manilla Road, Abigail, Kromosom and countless more. A massive European festival assault will consume much of July and August as well.

Further sermons on the coming of Suicide Black Snake should be expected over the coming months, along with additional Integrity live actions.