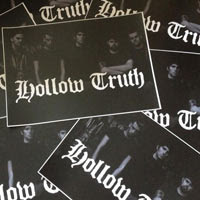 Hollow Truth from Dublin brings all the good elements of thrash and hardcore, which results in nothing but a crushing crossover sound that brings to mind a mix of Cro-Mags and Metallica. I have recently posted their demo and judging by the number of downloads, kids dig this stuff. So, check out the interview with the dudes while listening to the demo. And if they’re ever playing show in your area, make sure you show your support!

Hollow Truth from Dublin brings all the good elements of thrash and hardcore, which results in nothing but a crushing crossover sound that brings to mind a mix of Cro-Mags and Metallica. I have recently posted their demo and judging by the number of downloads, kids dig this stuff. So, check out the interview with the dudes while listening to the demo. And if they’re ever playing show in your area, make sure you show your support!

Can you give us some background on Hollow Truth for those out there who are not familiar with the band?
We’re a five piece, well at the moment a four piece, hardcore/thrash metal crossover band from the Bray area of Dublin in Ireland. The band consists of Karl on drums, Dean and Oisin on guitar and myself, Ciarán, on vocals. We recently lost our bassist, so are in the process of finding a new one, but we’re trying out a guy this week so fingers crossed.
We started the band in September 2012. Karl and I had been trying to start a crossover band in the vein of Best Wishes era Cro-Mags or something similar for a while, but had never managed to find a solid line up. However, one night I was drinking in a shitty local nightclub in Bray and bumped into Oisin and Dean who I’d gone to school with, and they said they were looking to start a hardcore band in the vein of TUI. I said I’d love to jam with them, so I asked Karl if he was up for playing a few tunes and I think the next week we started jamming and writing songs together. I think we wrote He Who Shook The Earth the second time we practiced.We then wrote The Earth Shook Demo and recorded it in October 2012. After that we secured a bassist and played our first show in December.

Can you tell us about MMXII demo you have just put out? How do you feel about it once it’s finally out?
Our demo is really the first three songs and intro we wrote, and I really love those songs. I think I can speak on behalf of the rest of the lads when I say we’re all really proud of the release, but we’re way more excited for our new songs to come out, as we’re really taking our time writing these ones.

What's the general response been like to this release?
To be honest it’s completely taken us by surprise. We just wrote a couple of songs so we could start gigging around Dublin, and didn’t expect so many people to be into it. It’s cool because so many people involved in the metal scene in Ireland also really like the tunes, as well as people into hardcore all over the world. We’ve gotten a 90% positive response, so what more could we ask for!?

Slow It Down Records has released the tape version of the demo, correct? Are there any copies left?
Yeah, that was really sweet. They put out the tape on with two different covers. One with a picture of us on it, and the other was a rip off of the Best Wishes cover, which naturally looked unreal. I think we’ve only got 6 copies left ourselves, and I think there’s only 1 or 2 copies left on the Slow It Down bigcartel. Another one time run of only 30 tapes of them demo is being put out by Dead End Music in Dublin soon, and will have a sweet Suicidal Tendencies Possessed To Skate rip off cover. So keep an eye out for them.

The demo tends heavily toward being metal than just being a pure hardcore album. Are there any specific bands or albums that influence the way you write?
When we first started jamming together we just wanted to start a hardcore band along the lines of TUI, but Oisin and Dean, like me, were big metalheads back in school, so the riffs they write seem to be influenced by thrash metal bands like Anthrax and Slayer as much as hardcore bands like Backtrack and Frustration (Best band in the world). Oisin is straight up the biggest Slayer fan I’ve ever met, haha. Karl also seems to be influenced from bands like Ceremony to Dr. Living Dead and Power Trip, so there’s a crossover of thrash metal and hardcore there too. I think listening to the three track demo that band Pegasus put out a year or two ago is what made me want to sing the way I do, and of course bands I love like Leeway, Cro-Mags and Megadeth.

The lyrics for MMXII are rather dark and negative. Where does it come from and what is the explanation behind the songs?
The lyrics for He Who Shook The Earth are about how easily a group of people can be brainwashed and brought to a state of fanatical madness, in the case of the song it's shown using the first to the ninth crusades from 1096 to 1227 AD as examples. The Sisters Of Fate is about how the human race is getting to cocky and comfortable, and how soon we’re going to get a big shock to our system after we completely make shite of the planet. The Sisters Of Fate are three characters in Greek mythology called the Moirai, who pull a string from a ball of yarn for every human born into the world. They cut it where they feel appropriate, and the length of the string represents the length of that persons life. So the lyrics deal with us tempting the Sisters Of Fate into cutting the planets string shorter than naturally intended, thus ending the earths life prematurely. Finally, Terrible Winds is about a pretty disgusting person I knew. The theme of the song is influenced by the poems of Dante’s Inferno, and the particular circle of hell that this person belongs in. According to Dante, the souls trapped in the second circle of hell are tormented by endless storms of wind, or “terrible winds” as he put it.

And where do you draw your inspiration from when it comes to the lyrics?
The main inspiration for my lyrics, come from ancient literature and mythology, and using ancient myth and historical incidents/lessons to relate to everyday life and troubles. I study Ancient and Medieval History and Culture in college, and have a particular fascination with the Imperial period of Rome, so expect a lot more classically themed lyrics in our next release.

I love Ireland, I used to live there some time ago and it was crazy. However, except for just couple of bands, I have no clue what’s happening over there in terms of hardcore. Can you shed some light about the state of hardcore in Ireland nowadays?
Although it’s been fairly quiet lately for shows, the quality of bands in the Dublin hardcore scene is incredible. Frustration are probably my favourite hardcore band in the world, I’ve got a fucking Dead Earth tattoo on my foot haha. Other great bands in Dublin at the moment are Bang Bros, Nibiru, Pulled Apart and Vacant, and there’s great metalcore and post-hardcore bands like Red Enemy and Milestones. Up the north there’s bands like By Any Means and Lantern For A Gale, and down the south in Cork there’s a new band called Harboured who everybody really needs to check out because they rule. We’re playing with them in Dublin on my Birthday which I can’t wait for.

What goals would you still like to achieve with the band? When can we expect a full length album?
At the moment, we’re writing songs for an EP that currently looks like it’ll be coming out in Europe on 7” this summer through a pretty rad label, so hopefully everything will go to plan with that. The new songs so far seem to have matured a lot from the demo in terms of song writing, but will be the same style of thrash metal and hardcore crossover, only better and with some much harder mosh parts and bigger sounding chorus’ which we’re all pretty happy about, haha. We plan on playing as many shows in Ireland as we can, and also want to try get to the UK and the mainland, so any promoters out there that’d be up for putting us on over the summer send us an email!

Do you have any shout outs or anything that you would like to say?
Thanks a million for taking an interest in our band and taking the time to interview us! We also hope you enjoy the next release we put out too.