New Blood: The Weight We Carry 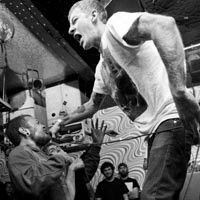 The Weight We Carry is a working class heroes band from Rochester,NY that plays metallic hardcore that’s both heavy and vibrant. Apart from hard-hitting tunes, the band delivers smart and important message about the way we get screwed by big corporations and government. But it's no preaching, just telling it like it is. Make sure you check out Downcast ep the band has released recently!

The Weight We Carry is a working class heroes band from Rochester,NY that plays metallic hardcore that’s both heavy and vibrant. Apart from hard-hitting tunes, the band delivers smart and important message about the way we get screwed by big corporations and government. But it's no preaching, just telling it like it is. Make sure you check out Downcast ep the band has released recently!

Can you give us some back ground on The Weight We Carry for those out there who are not familiar with the band? Tell us where are your from and how long you’ve been together as a band?

We're a Hardcore band from Rochester NY. We have been a band for a little under two years. We hung out together all the time, and all played the right instruments for the job. We all loved Hardcore, and had been a part of the local scene for a long time, so it just made sense to start a band.

You have just put out a debut Ep called Downcast, can you tell us about that?

It's the first six songs we wrote. We named it Downcast because that's who we are; the downcast of our society. Whether its what we do for a living, having tattoos or how we see every day life. A lot of people in the world have been judged and cast aside for unjust reasons and there comes a time when you need to stand up. Be upset, but don't be ignorant. People are so naive to the world and its sickening.

The ep is released on vinyl by Full Circle Attack Records? I’ve never heard about them, what this label is about?

Around the time we were getting ready to record, our friend Jeff Knight had decided to start a indie label. He asked us if we would be interested in doing it through him, and we said yes. Jeff has been around hardcore in Rochester, Syracuse, and Buffalo forever, never played in any bands, but supported. He loves hardcore and decided he wanted to get more involved and give back. We all love how things used to be, colored vinyl, limited pressings, show posters, putting heart into the clothes and things you sell at your shows. So we put the album out on vinyl, rather than cd. We thought for the ones that remember, and the ones that are just getting interested, it would be a better hard copy. We put a free digital download code in every album, so you can still have it on computer, burned cd, or whatever you choose. 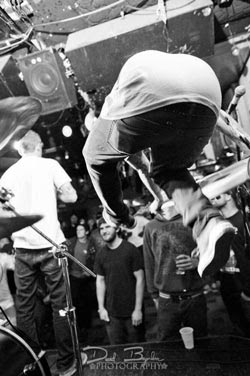 How would you describe your sound? Who are your biggest influences?

No filler Hardcore. There's metal, and sludge influence as well. We're a hardcore band, but we don't limit ourselves to a specific sound. We all listen to all different kinds of music. Our name actually came from a Beatles song. We all love old hardcore, new hardcore, no one specific band really influences us, but we would like to think we are following in the footsteps of past rochester hardcore bands like Borrowed Time and Dawn Of War. We're inspired by hardcore in general, the mentality, and heart behind the music.


The mood in your music is rather bleak and negative. Was there any specific event that inspired that outlook on life?


No one in our band grew up with much. Just like a lot of people in our hardcore scene. Our songs and our lyrics are derived from our day to day life. We all work manual labor jobs. Cory and I both hang drywall, Nick works as a dock manager at a metal fabrication company, Dean is a Machinist, and Casy is a tattoo artist at a local tattoo shop called "Horns And Tails". We are the Working Class. We work really hard and have almost nothing to show from it. Between the rising prices and rising taxes, it leaves us with very little at the end of the week. A lot of our frustration comes from that, and what seems to be a long standing tradition in America of, the person lifting the heaviest weight, walks away with the least. We feel the sides should be switched. The more you put in, the more you get out.

The Working Class, Proletariat, Fencewalkers show you are not afraid to make strong statements with your music. What is the main driving force behind your lyrics?

We all have working class jobs. The song "Working Class" is essentially our anthem for people out there that go through, and feel the same as us. Proletariat, for those who don't know, is considered the lowest class. The song represents feeling as though every step we take forward is two steps backwards. Then "Fence Walkers" is about the fakes that come into the hardcore scene for all the wrong reasons. For those who have no heart.


Generally, what are some current issues in the world today that you think people should pay more attention to?

Tax the churches. Question the Government. Stop doing things half way and giving up. Get pissed, and stay pissed. We are politically driven, but we refuse to label our selves. We are not liberals, we are not republicans, and nothing in between. When you label yourself, you limit yourself. We just pay attention, and put our opinions out there. We don't preach at our shows. Our opinions are in our lyrics, and if a person cares enough to read them, and agrees, that's great. If not, that's ok too.


From your perspective, what is most exciting living in USA in 2013 it and what sucks the most?

Exciting - Judge is playing Black and Blue this year.

Sucks - Pop culture is garbage. The things that are important to people in today's world, make no sense. Start thinking for yourself. 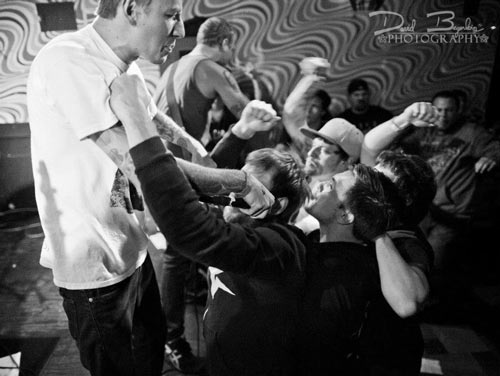 You represent Rochester scene. What is the scene like over there? Any good bands from your area that kids should check out?

Our scene kind of faded away years back. Lack of bands, venues, and people's lost interest. When we started TWWC, the scene was still slow, but it's starting to pick back up. Our friends in Such Gold, and Sirens and Sailors have had a lot to do with it. They tour all year round, they're both really hard working bands. Some local hardcore to check out would be Forked Tongues, The Storm, Wreckage, Face Off UCHC, Death Camp, Former Lives, and if you like hip hop, Tugboat MC. Also check out a local clothing company, HELL ON EARTH, they've been supporting the hardcore, scene and its bands since 1995.

Click here for more info about the band. Thanks to David Beyerlein for letting me use the photos. Check out his other work here.