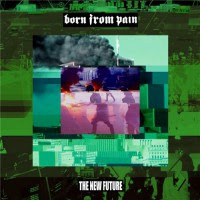 With The New Future the band continues to blur the border between hardcore and metal. It definitely falls into the first category, but you can definitely hear a lot of thrash or even industrial metal influences at certain times. It starts with aggressive and in your face Change Or Die and really clever Never Walk Alone. Both are solid tunes! The next one, American Treasons, is driven by catchy as hell riff and is generally damn good song even despite the weak chorus.

However, deeper into the album some crazy shit starts to happen. It sounds like the guys thought they were too good to simply play hardcore so they decided they would try some new stuff like techno beats hoping no one will notice. Tracks like Kampfbereit are totally awful; the same goes for The New Future. It sounds like fucking Fear Factory or Slipknot with all the keyboards and crappy groove riffs. The guitars and stuff are uncreative and the overall aggressiveness is way too forced. Too much studio tricks and not enough rawness make these tracks totally not striking an emotional chord in me.

With first couple of tracks on The New Future Born From Pain proves their guns are still blazing, but it’s somehow different story with the rest of the album. Unfortunately, although I really tried to focus on positive, this is a pretty mediocre release. . It’s a shame cause the band obviously had something to say with this release in terms of politics, but I’d rather read the booklet than suffer through some of these tracks once again.