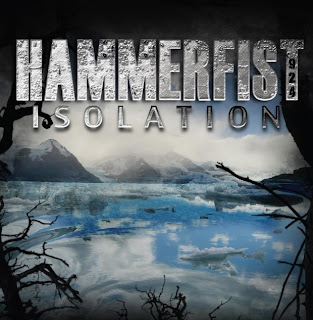 This new mcd by Hammerfist is five tracks strong and each one hits hard with focus and intensity. Staying true to their hardcore roots, most of the tracks come and go in a less than two minutes, but there’s enough talent and good ideas here to keep things varied. From the very beginning you get a sense that the band put a lot of effort into song writing, as all the tracks are well structured and keep the right balance between being engaging and aggressive.

Every track is executed with passion and you never get the feeling of forced delivery. The ep progresses smoothly from one track to the next, swinging between tempos and tone. Skin Change is a solid opener, with a testosterone-fueled heavy metallic hardcore sound that goes from fast to bad-ass breakdown. Ultima Thule continues with a massive riffs and tight beat, especially in the second part when shit gets slower and brutal. Illusio is a slower song driven by heavy groove and tight beat. The solos in this one are dope and everything about it is great. Forest Of The Dead also relies on heavy-ass mid-tempo passages, and when it gets fast it’s punishing. Carry The Weight has band going for more streamlined approach with a raw display of force clocking in less than one and half minute.

The production is raw but beefy, working in favor for the band. The lyrical focus is a power mixture of having self-respect and perseverance, but despite the overall bleak tone of most of the songs, there’s underlying focus on better days. The sincerity that emanates from the music is something you cannot fake and Hammerfist manages to come out with fresh and hard-hitting lyrics. Overall, like I said, this is a solid release and hands down band’s best work to date. If you’re not familiar with Hammerfist, cop this ep from Ghost Town and make sure you catch up on band’s back catalog.