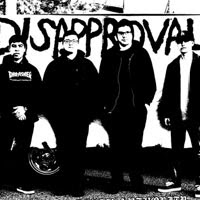 Dissaproval hails from Southern California and has cought my attention with their debut ep, El Monte Youth Authorite. It delivers five hard-ass tunes played the way it should be - straight to the point and nothing too much intelectual. Check out short interview with the band.

Dissaproval hails from Southern California and has cought my attention with their debut ep, El Monte Youth Authorite. It delivers five hard-ass tunes played the way it should be - straight to the point and nothing too much intelectual. Check out short interview with the band.

For kids reading this that might not be familiar with the band, where are you from and when did you get started?
We are from a small city called El Monte thats about 20-30 minutes east of los angeles, california. and this band got started jan/feb 2011.

Let’s talk about your latest ep ‘El Monte Youth Authority’, its sounding really tight. How would you best describe the style of it?
Thanks man, hardcore punk. plain and simple.

How did you hook up with Juggernaut Records, who are from Ukraine? They’re good dudes releasing good bands, but it’s kind of unusual to band from the States to work with a label from this part of the world.
When we released the EMYA promo tape last year, Roman from Juggernaut Records hit us up and wanted to release that as a one sided 7", but we decided that a euro pressing of the El Monte Youth Authority 7" would be better. I'm also pretty sure our friends in The Pack had something to do with Juggernaut wanting to release the 7", so thanks to The Pack for helping with that.

Who are your strongest musical influences and why?
Think I Care has always been the main influence since we started the band. But for the El Monte Youth Authority 7" we were definitely influenced by a lot of the Boston Crew.

And where do you draw your inspiration from when it comes to the lyrics?
Life, every song is about something i see or experience in hardcore or my daily life

I like the message in the Working Song. Many hardcore bands bitch about having to grind 9-5, but at certain age you discover you gotta get by. Do you think honest, hard-working men don’t get respect they deserve?
We all grew up watching our parents work hard and struggle, none of us had it easy. We're also all probably going to spend the rest of our lives working hard and struggling, its just the life that we grew up with and know. I Definitely respect the man whos working more then 40 hours a week breaking his back just so he can barely afford to pay rent and feed his family more then i respect some dickhead in a suit who doesnt even lift a finger and thinks hes better then everyone

As we touched this topic, you guys are young. How do you think about the way things are going on in the States right now? I mean, is it hard to find a job or get education for young people?
We're all in our early 20s, and it is definitely hard to find a good job right now if youre young or old, thats definitely the hardest thing. 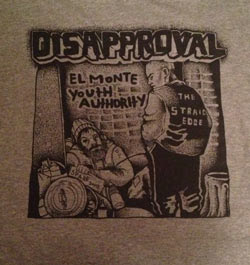 One of your tees shows a dude in straight edge jacket pissing on a homeless guy. I have mixed feelings about this one, so what’s the story behind that?
it's supposed to be a withered drug addict, but it ended up looking like a homeless guy. oh well, it's still badass.

What do you enjoy the most about being part of hardcore scene?
Playing cool shows with our friends, thats about it.

What’s the scene like in El Monte at the moment?
There is pretty much no scene in El Monte, we're the only hardcore band. We used to have a lot of cool street punk bands when we were in highschool but that shit died out.

What have you planned for the rest of 2013?
Releasing a new tape on SuperSoldiers/Stomp Records. Doing a couple tours with New Brigade & Value and just writing our new 7".

Anything you want to add or shoutout?
Thanks to you doing the interview, Juggernaut, Thick Skin, New Brigade, Value.