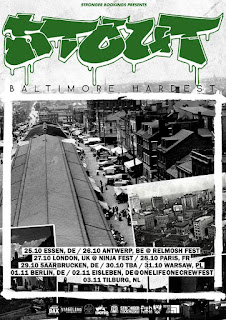 Stout will play couple of shows all across the Europe in October, including shows in Poland, Germany, United Kingdom (Ninjafest!) and more!

Rucktion Recs have finally dropped the debut album by Crippler LBU, the recent addition to London hardcore scene. Heavy as fuck hardcore featuring dudes from some of the well respected local bands like Tirade, TRC, Flawless Victory and more.

Germany's Risk It! will drop new 7" called  “The Only Thing” via Farewell Records.Stay tuned for more info!

Out For Revenge announced it will release new album in Fall 2013 on Westcoast Worldwide Records. The record is yet untitled, but you can listen to a new song Rap Trap here.

The Wild Styles is exclusively streaming new District 9 track, The Letter from the upcoming 7" entitled SouthBronxMemoirs. Check it out here!

War Charge is streaming new ep,  New World Justice on their bandcamp. 7" version coming soon on Purgatory Records! It should be out in September. The guys also plan to work on a full length, keep your eyes open!

Another reunion! Ryker's are back to perform at 20th anniversary of With Full Force festival taking place in Roitzschjora, Germany June 27th - 30th, 2013.