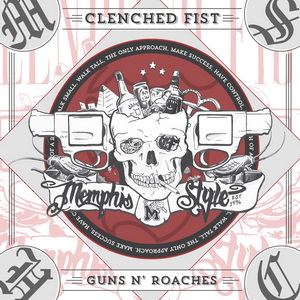 Clenched Fist - Guns N' Roaches (DIY) - Clenched Fist plays brawling hardcore that will scare the shit out of every kid who got in hardcore during the era of tight jeans wearing goofy bands. The band has been around for I don’t know how long and their debut LP Welcome To Memphis is already a classic of ignorant and reckless hardcore. After some down time, it’s good to see the them being active again and their previous album Just Like Roaches was one of the highlights of 2009. On Guns’n’Roaches the band fortunately refuse to change and stick to what they do the best.

From the first track on, it’s clear they haven't lost their touch. The songs are intensive but far from generic, giving the listener a taste of different styles while maintaining that gritty flavor. It’s good to get the album where the entire shit is dope and each song hits the listener with a crushing brute force. Clenched Fist is a beast on tracks like Guns N Roaches and A Damn Shame, but actually all the tracks are top notch.The raw production only strengthens the album’s punch.

Joel doesn’t hold back when it comes to his lyrics. With the manic flow he delivers tales of Southern pride and deals with some crazy conspiracy theories that are being tossed around every time something tragic happens. He comes across sharp and pissed off all the way and is one of the most distinct elements of the band's sound. Especially A Damn Shame sounds fucking strong and talks about those pussies who don’t respect their roots and try to be who they are not. ‘Erase your accent and hide your past / Kissing vapid internet ass / Sophisticated & above us all / Up turned nose at my Southern drawl / Insipid traitor beginning at birth / A self-hating rebel, fucking scum of the Earth’. This shit is awesome!! Plus, you get their take on Lies by Cause For Alarm which sounds like on steroids when compared with the original version. This isn't an obvious track to cover and the band executes it flawlessly giving it much rougher and harder edge. Clenched Fist have been together for a long time already but has never compromised their sound and attitude. Guns’n’Roaches will appease old-school heads and it showcases band’s undeniable love for hardcore. Killer album!