Kid Armor is a straight edge band from South Orange County that recently dropped Better Days ep to please all the kids into classic hardcore sound. If you dig youth crew and west coast punk rock, this is for you. The interview was done just after the ep was released.

Kid Armor is a straight edge band from South Orange County that recently dropped Better Days ep to please all the kids into classic hardcore sound. If you dig youth crew and west coast punk rock, this is for you. The interview was done just after the ep was released.


Tell us some background on the band? When and how did Kid Armor start?
Kid armor started back in 2010… some kids playing hardcore punk just for fun. We played a few shows, but at that point we were all pretty busy with school, the band sorta went dormant. We started it back up a year later – made some lineup changes – and recorded “Better Days.” … here we are!

Is there a story behind band’s name?
Yea! Shea came up with the phrase before the band started. I want to say it was in the Disneyland parking lot haha. A few of us were hanging out talking about life in the hardcore community, and Shea described straight-edge as sort of a “cultural armor;” something that strengthens and protects us from all the bullshit out there. Kid Armor came out of that train of thought. 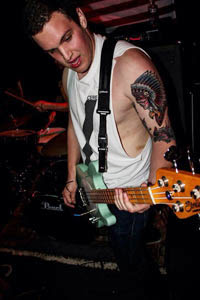 Tell us about the new ep, Better Days?
“Better Days” is our newest set of recordings – There’s a few variations of the album in the works – one on Commitment Records (UK) with 7 songs, and an American version of the album with all 10. Were still hammering out the details of the second release, but we should have that out by late summer.

Commitment Records is putting it out on vinyl. When it’s going to be available?
Exactly! Commitment Records is doing a limited pressing of the vinyl (with some incredible artwork.) Pre-orders for that are up on our big cartel, and on the Commitment UK website. Those should be shipping out the first week on June. Were super stoked on it!!

The label is from Europe, how did you get in touch? What was the main motivation to work with them?
Well… We sent a rough version of the album to a few labels we really liked just to see what would happen, and Positive&Focused was one of them... (Unbeknownst to us, they’re based out of Europe). They were really stoked on the album, but had other projects going on, so they put is in contact with Robert from Commitment (UK). Robert was super stoked on it too, and wanted to release the album in Europe. We thought it was sort of crazy, but also an awesome way to get our music out to different scenes. So via email, we worked out the details and got a release going. They have been awesome throughout the whole process.
But this whole thing is pretty crazy - it really shows how tightknit the hardcore community is… We have a band from California, working with a recording company in the Netherlands, who worked with an artist from Spain (Javier Ruiz Arregui) for the record cover. Small world for sure!

There’s a great classic hardcore vibe in your music which I dig a lot. Who are your biggest influences?
Absolutely – It’s something we embrace. We all grew up listening to the great Orange County punk bands… TSOL, Adolescents, Vandals, CH3. But those bands shared a much different experience than us – we don’t do drugs or drink. So for us, it’s a pretty good mixture of the east coast mindset, and the west coast sound…Obviously each of us listens to a wide variety of hardcore. But in “better days,” you’ll hear Minor threat, Gorilla biscuits, Judge…. Chain of Strength, Agent Orange, Descendants.

I’ve been reading the lyrics for the title track, Better Days, and I like the message you’re trying to get across. What made you write this song and what would you like kids to take from it?
The title track, “better days” was written about a friend of mine who gave up her entire social life for possessions. It was just stupid watching this girl become more miserable even though she was getting everything she wanted. It’s basically a response to consumerism – it’s hard to escape, but “better days” just try’s to put everything in perspective. What’s more important… 5 rad friends, or the Iphone 5?

What are some other topics that you tackle in your lyrics?
The lyrics are all over the place, but we’re super proud of them – the lyrics are the reason we are a band. But in terms of content, a few of the songs deal with our experiences with the straight edge lifestyle. “Find the light” and “pound” are reactions to people changing…people growing older or distancing themselves from something they believed in. “Side Effects” is a pretty fun one – it’s just a reaction to how our culture takes medication for virtually every ailment. And “Jackhammer” solution is a response to the tough guy mentality in hardcore….just beat the shit outta someone rather than think through it.

Straight edge seems to be an important part of the band. What does it personally means to you to be SxE? What was the motivation to pursue this way of life?
It’s definitely inescapable. Our lyrics, our mindset – it all resonates from our commitment to staying away from drugs and alcohol. For us, we’ve decided that life is just better when drugs and alcohol aren’t part of the picture. And by no means are we suggesting that having a beer or two is somehow a problem…we just think life is more fun without those things.

What’s your favorite thing about hardcore?
Ah that’s tough…what’s NOT to love about hardcore. It’s a great community, filled with passionate people. Hardcore is such a great outlet to express yourself, to refine your beliefs, to be challenged…. Great friends, great music…

What is your top five favorite hardcore records of the recent few years?
The new Mindset album is pretty killer… Shea and David have really gotten into that. The Mongoloids “Mongo Life” album has been Noah’s favorite album this year. Buddy’s favorite is the new Dillinger Escape Plan Album “One of us is the killer,” which is exceptionally well written. And rotting out’s new album….not much to say there. 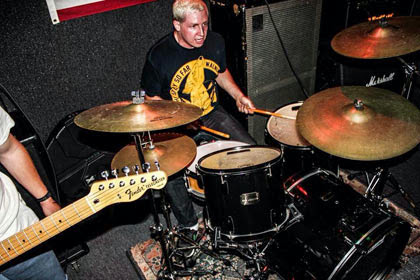 What bands have you played with or would like to play with?
In the past year, we’ve had the opportunity to play with sooo many good bands… Bane, Mongoloids, Cruel Hand, FocusedXminds… The local scene in Orange County is killer too …IsolationAD, LIV, Fragments, Seizures. But we’d really love to play with some of the east coast bands. East coast hardcore is so good.

What about favorite venues?
Favorite Venue…this one’s easy. Unit-B in Santa Ana is by far the coolest place to play in South County. The owner Mark has been exceptionally cool, and has been a vital part of the scene here. Those guys are rad.

What are you guys up to for the rest of 2013?
Actually, we have some big plans for the summer. This August, were teaming up with MADEINTHEUSA records, and the WE STILL BELIEVE FOUNDATION for the “Fed Up Tour.” Basically, were going to take the WSB message across the country for two weeks, play some shows, and help run food drives in each of the states we play in. We’ll be supporting ISOLATION AD, and playing with JudgementXday from South County as well. Those dates are posted on the WSB website, feel free to stop by their page and check it out!