Sharp and powerful hardcore out of France with the right amount of fuck-the-world attitude and hard-hitting lyrics. No bullshit here. There’s no shame in taking cues from the best of them so if you’re into The Rival Mob, Judge or Floorpunch, check this shit out!

Sharp and powerful hardcore out of France with the right amount of fuck-the-world attitude and hard-hitting lyrics. No bullshit here. There’s no shame in taking cues from the best of them so if you’re into The Rival Mob, Judge or Floorpunch, check this shit out!


Your debut ep should be out anytime soon, so what kids should expect from “We Don’t Need Your Friends”? Where did you come up with album’s title and what does it represent to you?
Hi Dloogi. "We Don't Need Your Friends" is 8 minutes of straight forward hardcore, nothing more nothing less. The title of our EP is taken from our last song "No Friends", the exact sentence is "I don't your friends, I'd better stay alone". This song deals with the "go to club – get drunk and drive" culture which I think is a plague for the youth. I wrote this song after i've spent the night at a friend's flat where we always chill but that night some people we don't usally hang out with came over and were doing coke and stuff in the kitchen all night long. I didn't feel confortable with that and so the lyrics came up pretty naturaly to me. I think it's more or less my version of a straight edge song, even if I'm the only one who is straight edge in the band I think we all share the same point of view about how drink and drive sucks. I have a pretty strong hatred for people who do that since my cousin died this way 9 years ago.
So yeah, I think it's better to be alone than with people you don't fit in with, that's the idea of the song.

The songs from you I’ve heard so far have very sharp and straight-in-your-face sound. What brought you toward that type of sound?
That's the kind of Hardcore we like and listen to. Some of us used to play in other bands before. The drummer and I were in No Solution, which was more like late 80's youth crew, more positive, both in the music and the lyrics. The 3 others in the band were in Black Page, a mix of Terror / Guns Up / Down To Nothing stuffs.
With Raw Justice we wanted something more "straight to the point", with a tension all along the songs, no down times. 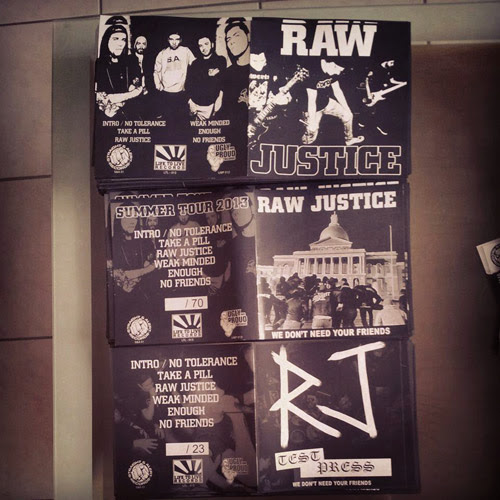 Bands that inspire you the most? Albums?
It would be a lie not to mention The Rival Mob, this is one of our biggest influence along with all the current boston scene ( Boston Strangler , No Tolerance, Prisoner Abuse…). Floorpunch is also a band that inspires us a lot. Concerning albums to make a long story short : "Raw Life" , "Hardcore For Hardcore", "Mob Justice", "Primitive" , "No Remorse, No Tolerance", "Fast Times At Jersey Shore" and last but not least "Limit Of destruction" by Rampage !

Is message in the songs important for you? What kind of topics do you like to cover in your songwriting?
Yeah of course the message is important, singing in a band is a great opportunity to speak your mind and alert the people to different kinds of problems. I mostly talk about what pisses me off. I don't try to reivent the wheel or write poetry, I just spit my anger and frustrations out, an try to avoid the clichés..
So far our lyrics deal with social / personnal issues, from the pharmaceutical / medical lobbys to break up, internet prophets / Conspiracy Theory or the fear of getting old .

Something I have to work on is talking about my lyrics when we play live. I think it's important to explain the audience what you're screaming about, but on the other hand it's not something easy to do. When the music stops you're alone with your mic and your words.

What were some of the best shows you’ve done so far?
Even if we are playing together since the fall of 2012 we've only played three shows so far so we don't have a lot to choose! Our first show was cool, even if Antoine and I had the flux, it was great to be back on stage after our last bands broke up, a lot of friends came to the show from other cities so it was pretty fun.
Last weekend we had our second and third show, it was fun too. The show in Paris especially was great, no stage, people moshing and singing alone on the covers. What more could we expect ?

What type of reactions from the crowd make you happy the most?
The record is not out yet so people don't know lyrics but when kids come to sing along on the covers it makes us really glad ! Just if we're playing and people seem to like and start moshing / singing or whatever it's great.
Also when people come after shows to tell us they liked it and they think what we're doing is great. It makes you appreciate the long hours you've spent in a rehearsal room.

You are from Nantes, France. How is the hardcore scene over there for those of us who are not really familiar with the area.
Well the scene is not at its best right now here, we used to have around Nantes or Rennes some great / good hardcore bands since the late 90's. First with the KDS crew ( Stormcore / Awol / Right For Life…) and a bunch of other cool ones during the last few years but now times are hard. We have Lasting Values who's playing some great youthcrew somewhere between Champion / The First Step / In My Eyes but they didn't play here since like a year or so. There was also Nantes Resilience ( 90's hardcore ala Gut Instinct / Rest In Pieces / Terrorzone) but they broke up like 6 months ago. Some members are starting something new but they won't be ready to play before a while. So we are just lacking of bands. However we have cool gigs here set up by This Is Your Scene, the crew who's booking shows. We had No Tolerance, Give or Sectarian Violence lately.

Favorite hardcore bands from France?
Our friends from xDIGx ( paris) are great, they just released a split 7" with Reality Check. If you are into Violation / Guns Up check them out. There is also awesome 80's hardcore bands like Youth Avoiders , Short Days ( they sound like The Observers), Shock ( Void meets Faith meets SSD) or The Night Stalkers ( their first demo songs a Circle Jerks record !).
There is two bands from Paris that I'm expecting a lot from : Jack Move (Boston 2K meets NYHC) and Cut Loose (Step Forward !) featuring members of xDIGx.

What are your thoughts on the state of current hardcore in general? Positives? Negatives?
Hum this is a tough one, I never really know what to think about the scene except the classic "it was better before". I feel no matter how is the current scene and when you would ask the question I will say " it was better before" ahha. I think the European hardcore scene is cool at the moment but we don't have huge / great hardcore bands like there was something like 4/5 years ago. OK there is No Turning Back still around but we are missing True Colors, Justice, Deal With It, Dirty Money… Dead Stop !
Another negative is that youth crew is not "hype" anymore, there is (almost) no bands to replace The First Step / Get The Most and stuff like this (oh yeah there is Mindset but still). However all the bands from Boston are great these days, they don't play youth crew but their sound is just so rad !
Eventually a bad point about the french scene especially : so many kids into that beatdown "tough guy" crap, please listen to Youth Of Today instead !


Apart from the 7, what are you looking forward to in 2013 the most?
2013 should be cool for us, we have some cool shows to come and a small tour planned for the begining / middle of july during which we will play twice with Hounds Of Hate / Violent Reaction and Twitching Tongues / Harm's Way.
It's supposed to be a 6 days tour but at the end we have another show with Hounds Of Hate / Violent Reaction in south France like 5 days after the end of the tour so we'll maybe go to Spain as well !
We'll also play with The Mongoloids / Wrong Answer and The Flex, so it should be a lot of fun!

Your thoughts on Judge reunion?
Hum like every reunion show / tour it's alway a big discussion. Are they doing it for the fun of for the cash ? As far as i'm concerned I've been to see Gorilla Biscuits, Floorpunch and Youth Of Today reunions and I've never been disapointed. It's cool to have a chance to catch live bands you've always been fan of but you were to young to see when they were active.
Concerning the Judge one specificaly, well, I was curious to know the line up, I really doubt the smoking Mike Judge of today would really fit singing "Bringing It Down" ahha but it seems that it was great at the end !

Anything you want to say before we wrap up?
Thanks for giving us a chance to introduce and express ourself. We are really stoked that people seem to like our music. Also thanks a lot to Nikolay / Ugly & Proud records and Dan from Truth Inside / Life To Live records for releasing the 7" with me.
Keep an eye on Straight & Alert records, we have good plans for the future, and you can always check our distro on www.straightandalert.com, we have new records every week!
Start bands, write fanzine, put out records, book shows. Everyone has to be active if we want the scene to be alive.