I recently got a package from Rucktion Recs and been blasting these records for the last couple of days. Bands like Kartel or Crippler are probably either love it or hate it type of hardcore, but I got a soft spot for this sound. Nothing fancy about it, just grimy and heavy hardcore that hit the right spot. Check out the reviews after the jump! 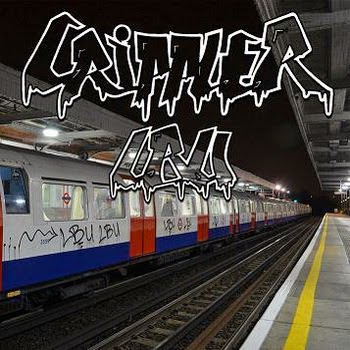 Crippler LBU - s/t (Rucktion) - Crippler LBU is a couple of guys from London beatdown crew coming together to play hard as nails hardcore that takes cues from bands like Knuckledust, Bulldoze or Krutch. Enlisted in the project are dudes who you might know from bands like Tirade, TRC, Flawless Victory and some others. After very cool demo, this is their debut full length.
Weighing in with ten tracks, the thus music is hard-hitting and dual vocals are killer. Straight up tough guy hardcore done the old school way. From the start to the finish the levels are kept high with all the tracks having strong vibe and attitude to them. The band does not try to break any new grounds with the shit, the way they mix hardcore, metal and hip-hop adds just the right touch of originality to the songs. The vocalists break down various topics throughout the album and their delivery is constantly on point. This is hard-hitting record that deserves your attention. Kartel - Gutter Music Vol 1. (Rucktion) - After couple of successful releases these London hardcore veterans returns with more quality tunes. As powerful as ever the album kicks off with Intro and hard-hitting Shitstorm and there is no letting down until the last track. Gutter Music Vol 1. doesn’t disappoint with some real heavy-ass hardcore that takes the best elements of Knuckledust, Shattered Realm and Fury Of V. This is love it or hate it combination for some, but I dig it. The album is crammed with a lot of stomping tracks that tip with clear-cut energy. Some of my favorite are Shitstorm, Cashflow and This Thing Of Ours, which just get heavier and heavier with every listen. The thing I like about this album is how it nicely blends some thrashy riffs with hip-hop vocals to give songs more bang and substance. But don’t expect no sophisticated and experimental shit, it’s all about that old-skool tinged straight in your face macho hardcore. This is a well-rounded hardcore album that has great essence of what Kartel is all about. Recommended ffo. Fury Of V, Knuckledust, Krutch, Second To None.

True Valiance - Expect Resistance (Rucktion) - True Valiance hails from UK and this is their new album.The sound of Expect Resistance is heavy with a lot of 100 Demons and All Out War influences as they blend core sound with a lot of metallic riffs. Judging by the cover art and the label behind this release, I was expecting more in your face approach. In reality, the band stray more into metal territory with song structures that are more complex than your average hardcore record. I like the album, but it sometimes feels too polished and lacks the bite and edge. As far as mixing hardcore with metal goes, it only makes sense to me when it’s more about bringing that inhuman demonic rage with your shit than technical wankery. Beast mode is the only way to go. The law of the jungle is to prey upon and destroy the weak. I think the overly polished sound quality is killing some of the potential this album has. Some more dirt would make it sound more menacing. The music itself is alright. The guitar work is dope, constantly moving over the pounding rhythms and adding a good balance to the songs. There is the mix of expected breakdowns and moments of more melodies, and the band throws in some catchy melodic riffs now and there that make the whole thing sound like Swedish metal. All in all, a decent release.