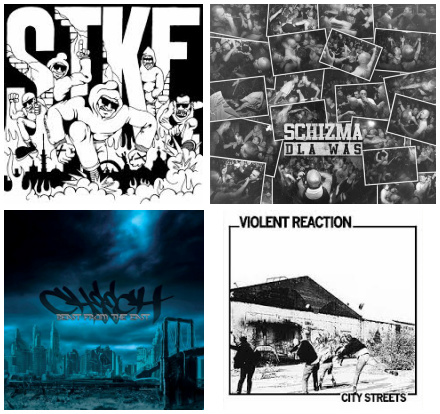 
Cheech – Beast From The East (WTF Records) - You get 18 tracks in here and even if it seems a lot for hardcore standards, the album goes down smoothly. Beast is a well-rounded piece - there are couple of tracks that I like more than the others, but in the end all of them get the job done. Songs like Everyone Dies and Working Stiff make me wanna break stuff and beat up random people. As always, there’s a good mix of straightforward hardcore with some heavier riffs and punk rock influences. Most of the songs are fast and to the point with enough of changeups fast parts to solid mosh parts, and you always get a fair share of gang vocals. The reason the album is such killer is because it’s real. When it comes to lyrics, Cheech is here to put things straight. A lot of songs deal with how everyone whos not a politician or a banker gets screwed nowadays. And Working Stiff is a song I sing every day in my head when driving to work. Plus I dig the twisted, sarcastic attitude that reminds me of SOD or Sheer Terror.

Violent Reaction - City Streets (Painkiller records) – Reckless and ripping hardcore outta UK. It’s raw as fuck but nicely balances fast, rabid hardcore punk with some grooved-out parts and hooks. One of the albums that get you hooked on their sound within the first couple of minutes of listening. It’s hostile, anti-social, grimy, ugly and proud. Each track rips with fucking violence and anger and the vocals are barbed with venom. Songs like City Streets or Judgement Day really pump me the fuck up. It’s cool to hear of a band who’ve managed to pull off a sound between classics like Discharge, Blitz and SSD and still sounds fresh. Overall, this is a smashing album and it’s clear that these lads have put a lot of passion and anger into every song. Lyrics like “Violent Reaction take no shit. Straight Edge. Fuck you!” make for an instant classic.

Schizma - Dla Was (Spook Records) - This shit makes me wanna go walk around and fight﻿ a motherfucker or two! Schizma is a classic band for every hardcore kid growing up in Poland in late 90’/early 2000s. I easily put their early albums, like Pod Naciskiem or Unity 2000, on the same level as Set It Off, Crime Ridden Society or effing Not The Tables Turn. They got the skills to hang in the big leagues, but somehow their more recent albums were hit and miss. While they were sure to have at least couple bangers, they always included some mediocre songs as well. But on this ep the band is definitely on the next-level shit and focused as never before. Schizma is ripping hard through these tracks like few others can, straight in your face hardcore, no messing around. Beefy but vibrant production only strengthens the the overall vibe of the album.

Sike - Demo 2013 (We Stand/Paranoid Records) - In the mood for straight ahead, no frills hardcore? Sike is a young SxE band out of Kiev, Ukraine which plays fast and raging old school hardcore. I bought this album at their show in Warsaw, which was by the way cool as shit. It’s always nice to see young dudes who are 100% into what they’re doing, nothing but good clean fun and dedication. Musically, the ep is fast and uncompromising with songs barely passing one minute mark. Maybe it’s the rough sound quality, but the music makes me think more of bands like SSD, Righteous Jams or No Tolerance than Youth Of Today. Nothing groundbreaking, but still a solid listen. The last track, Voice On The Wall / Graffiti Stomp, ends up with a dope funky groove part with rapping vocals. The lyrics are straight forward and honest, no linguistic acrobatics and poetry. I can relate to most of the stuff they sing about. This release is a collab of two young Russian labels - We Stand and Paranoid records. It’s nicely put together and the cover artwork is killer.I suggest you check on them once in a while cause I expect some cool shit to come from these dudes in the future!

Stand Your Ground - The Chaos Around (District 763) – Second album by Germany’s Stand Your Ground. These dudes have skills and potential but for some reason they just can't nail it down. Pretty ok at parts, but it lacks that special sauce and I am bored to death by most of the tracks. There’s too much crappy metal and not enough force I would expect from a hardcore album. It’s not my cup of tea but google for their facebook page or bandcamp cause you might actually like it.

One Life One Sentence – S/T (Cruzade Records) – The opening track sounds like second rate Hatebreed rip-off but the rest of this short MCD is actually decent. Nothing over the top, but for the fans of this style its solid. When I check out new hardcore album I love it when I can hear something raw and aggressive but I also look for some depth and substance. That’s something that seems to be missing here, but still some songs are worth to check out.

Pornophon - Pornophon (Hasscontainer Records) - I totally can’t get into this album. It sounds more like hard rock than hardcore, and the vocals are annoying. There are lot of hardcore bands that incorporate this type of sound and still are cool, but this album totally lacks even slight amount of aggression. Not my cup of tea.

Falsos Positivos - Nuestra Hora (Cruzade Records) - Spain’s Falsos Positivos deliver their first album. I suggest you google their name cause it's a cool story behind that. Musically, this one mixes up some classic hardcore like Sick Of It All with punk rock but unfortunately comes across as rather generic. It got it’s moments, but lacks focus and punch on the whole. And most of all, the vocals are the main thing that puts me off - this kind of screeching voice is always a show stopper for me.