Cold Reality is a new band from Budapest, Hungary that plays hardcore with tight vocals and heavy-ass grooves. They got one demo already, which came out earlier this year and I advice everyone to check it out cause it’s dope. I they keep it this way I expect cool things from these dudes in the future. Here’s interview with Balázs who handles vocal duties for the band.

Cold Reality is a new band from Budapest, Hungary that plays hardcore with tight vocals and heavy-ass grooves. They got one demo already, which came out earlier this year and I advice everyone to check it out cause it’s dope. I they keep it this way I expect cool things from these dudes in the future. Here’s interview with Balázs who handles vocal duties for the band.

Tell me more about Cold Reality. How it all began? How long has the band been around?

The band was formed back in 2011, but there were a lot of member changes. It was especially hard to find a drummer. We’ve started writing music last summer, when I got to know to Dani and Mike. Bertold joined recently, because our previous bassist has another band (Iron Chains - http://ironchainshc.bandcamp.com/) and he didn’t have enough time to play with us.

What was your goal when starting the band? Did you have any idea how you wanted to sound or what type of lyrics to write, or did it just came naturally?

I’ve been a part of a few bands before, but this time I wanted to have a stable line-up in which the members don’t argue every minute and can make some heavy music together. I wanted a band which sounds like Expire, Cruel Hand, Real Talk or Agitator.
Our lyrics came somehow naturally. I tried to make them meaningful and honest!

You just dropped your 2013 demo and I think it’s dope. For the people who haven’t checked it out yet, can you tell them what they’re in for?

We highly recommend our demo to people who like the bands we’ve mentioned in the answer before. We tried to make some individual hardcore music with also keeping the roots of the genre in our sound.

What do you think about how positively kids are responding to your demo?

We got a lot of positive feedback and we were surprised about the amount of honorable mentions.
There were some people who liked it, even tough we wouldn’t have guessed they would! We are very happy about it and would like to thank everyone for the support! 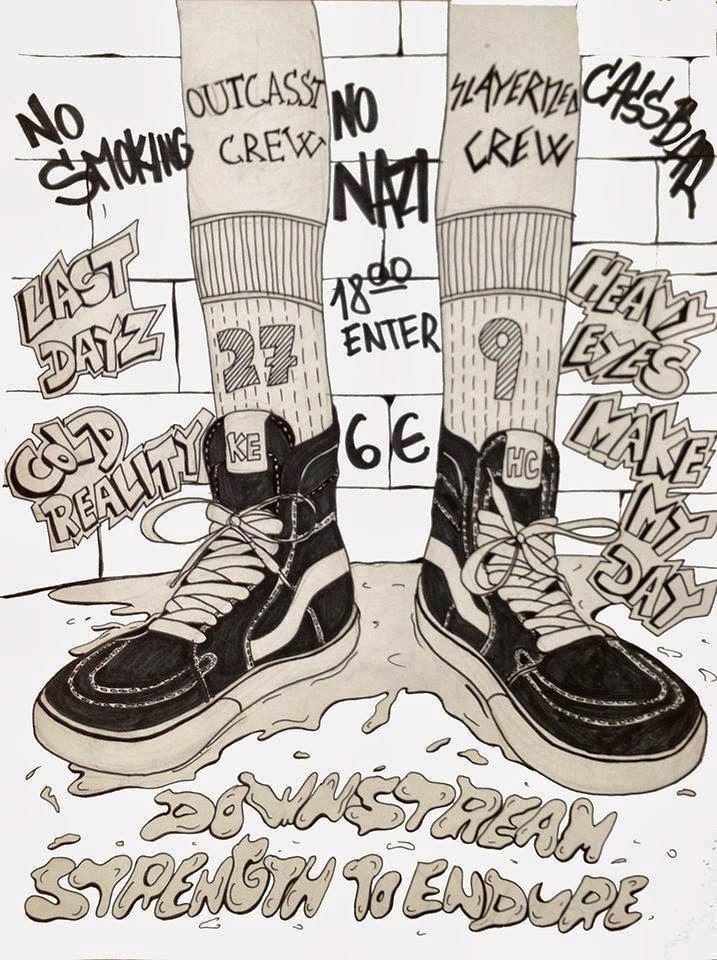 Can you tell me about the lyrics on the demo?

I think it’s very important to write about something people can refer to, so we wanted some meaningful and sincere lyrics on the demo. There are also some lyrics which are self-related. I tried to accomplish my best. I wrote about things I don’t like, the things that make me angry and disturb me.

What’s the craziest thing ever happen at your show?

Unfortunately we’ve only had one show so far. It was great but nothing very crazy happened. People enjoyed our music and we had an excellent time! However, we’ll have some more shows in June and we hope they also turn out good!

What are some of the life-changing hardcore albums for you?

Dani:
Champion – Promises Kept
Have Heart – The Things We Carry

Tell us something about the scene in Hungary? Are there any other bands from your area you support?

Unfortunately the situation is not the best here. As I organize shows with my friends (NO REGRET PRODUCTIONS - https://www.facebook.com/noregretproductions) in Budapest, I came to realize that it’s strange that hundreds of people come to shows if there’s a bigger band, for example Terror or Madball, while if there is a TUI or an Expire show there are a maximum of 60-80 people coming.
We often have to pay for the bands by ourselves if there aren’t enough people on a show. This way we frequently lose a lot of money. Anyway we try to keep the spirit and the Hungarian scene alive!

How’s life in Hungary in general? What’s the situation over there in terms of job opportunities, politics etc?

The situation is quite bad. Both for workers and students. It’s hard to find a job and even if you do, it often has a very low salary. Right now I’m between two jobs, so I know how hard it is!
The government has recently changed the laws in the higher education too and it’s getting harder and harder to easily learn what you really want to, but we hope for the best!

What’s the best food to eat over there?

Balázs: For me it’s a traditional Hungarian food, lángos!
Dani: I have to stick with Balázs! Lángos is the best!
Mike: Fish soup is my favourite!
Bertold: My mother’s stew!

What do you guys do outside of the band?

Anything else you want to say, shouts outs?

Thank you for the interview! Thanks for everyone who has listened to our demo and/or downloaded it! Shout out to Curse of an Age Records (https://www.facebook.com/curseofanagerecords) for putting it out on tape with a nice shirt!
Everyone should check out this label and support it with an order from their bigcartel!
We will release new songs soon, so everyone should get ready to our new stuff! NO ESCAPE is coming!