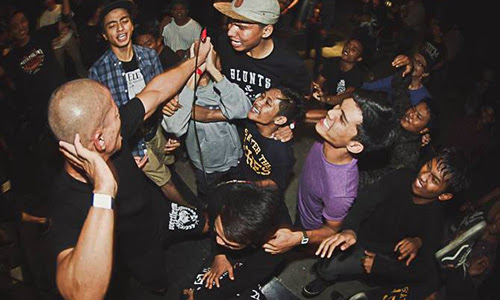 It’s always cool to learn about hardcore bands from different parts of the world. Not only you can discover tons of great music, but it also kind of gives you a sense of being a part of something big and important. So, this time it's Singapore. Although I just recently came across Overthrown, it turns out they have been churning their brand of heavy but no-bullshit hardcore since mid 90’, becoming one of the stalwarts of the local scene. Each band that keeps it DIY and manages to put out several releases and tour across Asia and Europe deserves respect. I hope this interview will shed some more light on the band for those not familiar, as well as make you check out their albums..

It’s always cool to learn about hardcore bands from different parts of the world. Not only you can discover tons of great music, but it also kind of gives you a sense of being a part of something big and important. So, although I just recently came across Overthrown, it turns out they have been churning their brand of heavy but no-bullshit hardcore since mid 90’, becoming one of the stalwarts of the hardcore scene in Singapur. Each band that keeps it DIY and manages to put out several releases and tour across Asia and Europe deserves respect. I hope this interview will shed some more light on the band for those not familiar, as well as make you check out their albums.

Alright, so first of all congratulations on the release of Unbroken ep. How does it feel to put it out?
Thanks man! We definitely feel good about it especially after releasing our last album just last year. Despite the busy work schedule, we are still able to put up something. It's great that we still have that drive to keep on writing new songs. To top it all, Ken Olden (Worlds Collide/Damnation AD/Battery/YOT) helped us with the mastering!

You’ve been around for quite long and you’ve got couple of releases out by now. How has your sound grown since you were starting out?
That's right. Maybe a little more aggressive now otherwise nothing much have changed. We try to keep it traditional as how we started. Still loving the 90s vibe!

I know it’s hard to compare yourself to other bands and styles, but what kind of vibe is your music on?
We are definitely into something fast and groovy. With heavy influence from bands like STRIFE and MADBALL. That mid/late 90s vibe if you know what we mean.

Any particular people or situations that you credit as a major influence on your lyrics?
Nothing much in particular actually. Our lyrics are based on what we go through in our daily life. Something we are pissed about, sometimes a little bit political, something about family, love and definitely delivering something positive out of it. It's a channel to vent out the negative emotions to keep us sane.

Tell us something about the hardcore scene in Singapur.
Singapore hardcore scene is rather small. Definitely one of the smallest in the world. But it is never dead since as early as 1988. Yes that early! Only from 2006 onwards when international hardcore bands started to tour Southeast Asia more often, more people from across the world discovered our existence. We have a lot of great bands here and now, most of the scene kids are very young. Mostly 16- 22 year olds. These are the active ones you see at shows regularly. You may not see much of older guys from our era at shows but they are still supporting the scene by buying merch and records. Although people come and go every now and then, there are always a bunch who sticked to it and keep the scene alive.

Is it hard to run a band over there? Do you get much support from local kids?
Running a band here is never easy. Not just hardcore but in every genre. Singaporeans are more interested to support anything foreign when it comes to music. Of coz we do have local supports every now and then but it's not strong enough to keep bands here going. A lot of bands here lasted for only 2-3 years. Maybe the real reason behind this is that the locals here are not willing to spend on or 'buy' local music although they do support them. Whenever there's a free show, easily 500-2000 people would come. But if there's a show with similar lineups with $10 entry fee, average number of people would turn up is probably around 100pax only! HAHAH. 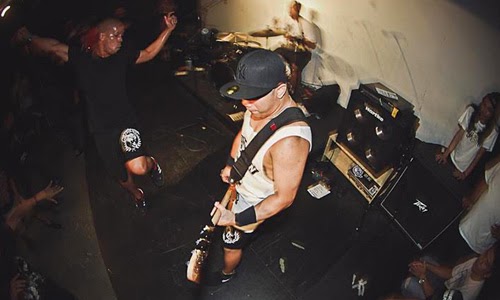 How popular is hardcore over there? How many kids show up at hardcore shows?
Hardcore is known here and yeah quite popular, although it was once misunderstood around 8-9 years ago. We do have support from local kids, not much but it's always good enough for us. These days, average is about 100 pax.

Is there any unity between kids from different parts of Asia? Do you get any support from other countries in your region?
The Asian scene is tight because we know most of the time we only have ourselves to support one another. Although we can't deny the fact that there's a little politics here and going on among the scene cliques, which is common but as a whole, it's one strong and healthy scene.

Tell us something about the European tour you did in 2012? How did that go?
Our EU 2012 Tour was really sweet. First time playing outside Southeast Asia and getting good support. Every single show we played was filled with supportive crowd that would mosh to our music and buy our merch. Everything went perfectly well. And of coz, to had that chance to support one of European's hardcore giants, NTB on the second half of the tour was truly a great honor and and having Belgian's best uprising band, A Strength Within to support us on the first half of the tour really gave us a sweet experience. We learnt A LOT about touring in EU and had so much fun. Being and Asian hxc band, we never thought we would go that far. Truly blessed to have such good people around us! 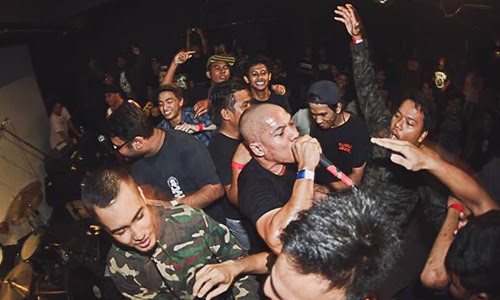 Is there anything that surprised you here in Europe? How do you think the scene in Europe differs from back in Singapur?
We were amazed with how huge Hardcore scene in Europe is. Maybe that's the reason why a lot of big American bands tour Europe every year. Bands we've seen and played with were all so good but unfortunately a lot of them seemed underrated! There are a lot of similarities between the European kids and the kids here in Singapur but one thing for sure, we see that bands there put a lot more effort with what they are doing.

Got any final words?
Thanks again for the interest to interview us! Shout outs to all our friends there in Europe! We hope to come back again every year! Keep supporting us!

All pics by Aszuan Alias.