Live Fast Die Fast is NYHC in its purest form so if you respect bands that got that rawness and aggression this is for you. No bullshit hardcore made by couple of dudes who are in it for the right reasons. The band has dropped ‘Keep Your Fingers Crossed’ album earlier this year and I advise everyone to check it out. Check out the interview with Paul who does vocals for the band.

Live Fast Die Fast is NYHC in its purest form so if you respect bands that got that rawness and aggression this is for you. No bullshit hardcore made by couple of dudes who are in it for the right reasons. The band has dropped ‘Keep Your Fingers Crossed’ album earlier this year and I advise everyone to check it out. Check out the interview with Paul who does vocals for the band.

Can you give a little bit of background about Live Fast, Die Fast?

We are an early 90’s style hardcore band from Long Island, NY. We have been around for 5 years. We started out because we wanted to play music that meant something to us, something that we grew up on.

Keep Your Fingers Crossed is getting pretty dope reviews and I think lot of kids are down for that classic NYHC type of sound. What was the main motivation when writing this album?

Yeah we are really happy with the way the record came out. In terms of motivation, we had been working on these songs since we put out our last record. We were lucky enough to connect with a great hardcore label like Full Circle Attack Records who wanted to release them for us. There are themes of political consciousness, social awareness as well as messages of family and strength from within throughout the songs.

You say you’re influenced by 80’ and 90’ hardcore. What is it about that era in hardcore that makes it so cool in your opinion?

To us, that’s what we grew up on. There were shows every night and every person in that venue, whether they were there for your band or not, watched and supported everyone on the bill. There was a lot of scene unity back then. That unity is what drew me into it because it really felt like I had found a home. The music was an emotional release, but the sense of family is what kept me coming back.

Is there anything that you think hardcore kids nowadays could learn from the very beginning years of hardcore when the movement was just shaping up?

Yeah, put down the fucking cell phone at shows. Get off of Facebook and Twitter and hand out an actual flyer. And last but not least, go to shows of bands that you never heard of. Watch the bands that are playing, don’t stand outside. Look, I am well aware and a user of technology, but I have a huge problem when it is the sole means of promotion. Nothing is more disrespectful to a band than when people are fucking texting or standing outside when they are playing. Bands work hard for a very small payout. Between the time it takes to practice, driving to a venue and making merch, all for half an hour of someone’s time. It’s really not asking for a lot.

I like the lyrics for Brothers United, which talks about the importance of supporting one another. It seems the message of unity has not been so popular for hardcore songs lately which is not cool.

Like I said before, it was that sense of community that drew me in to the hardcore scene. There is something about the friendships you make through this music. It is what I feel in my veins so it comes out when I am writing lyrics. The really cool thing about that song was that I wanted to include some of my closest friends on the record in some way. We couldn’t get everyone into the studio so I asked them to write what hardcore music meant to them. I added some of my own stuff to what everyone sent me and the song has really taken on the exact meaning of what I wanted it to. 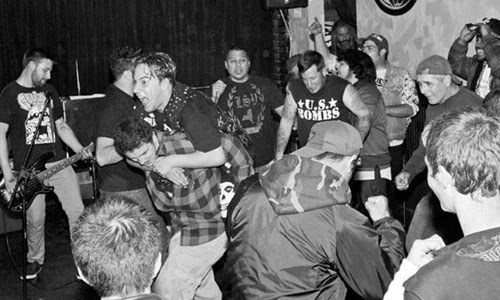 I’ve read the lyrics only to the songs posted on bandcamp, so what are the other topics that you sing about on the album?

I like people to think when reading the lyrics. I don’t want to persuade anyone to think any one specific way, I just want them to think. Brothers United is about the obvious, the sense of family I get from the music and our scene. Uncertain is about the state of the United States government. How nothing seems to get done because the country is so politically polarized. Abel’s Blood is about those who hide behind religion to carry out acts of hate. Just to be clear, it is not an anti-religion song. Horror Stories is about being lied to, hitting rock bottom and coming back stronger than ever. Red Tide is a song that supports the working class and the unions. For years they have been made to look like the bad guy by the conservative right wing when it is them that are trying to cripple the worker and our rights.

Tell us something about your hometown, North Babylon?

I am very proud to come from North Babylon. It taught me street smarts. It is a middle class, blue-collar town filled with hard working families. There is a great mix of people and its grittiness has been invaluable to me as a person.

For people visiting NYC, what places they should go to? It can be food, record stores, show venues…

Well if you are in NYC, go get tattooed at NYHC Tattoos. If you are there on a Tuesday night, stop by the East Village Radio studios to check out the Black and Blue Takeover radio show. Stop by the newly renovated Joe Strummer mural. Coney Island is one of my favorite spots plus you can get a real Nathan’s hot dog there. If you make it to Long Island, check out a show at Sinclair’s Pub, grab some amazing tacos at Swell Taco and get some of the best beer at Blue Point Brewery.

The cover of your first album included the picture of CBGB. Do you have any cool memories connected with this place?

Yeah, the first Sunday Matinee I ever went to was the Raybeez tribute show. Place was packed and I got to see some amazing bands. To me, that venue epitomized what NYHC is/was about. As the years passed, I saw other great shows there, but it was that one that always stands out. Like the first time you go to a pro baseball game.

How do you think world gonna end?

From our own ignorance.