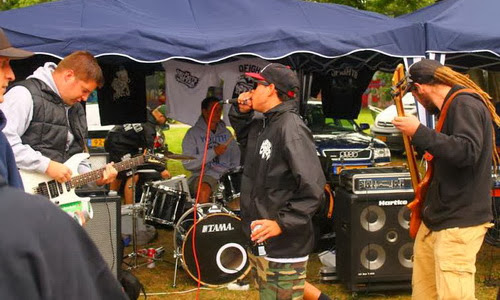 Bad Attitude is a new band from Leeuwarden (Netherlands) area with members of Cornered, Pantah and 0fight8 with a mission to go back in time with their sound. Their first demo is filled with raging, in your face hardcore that kids in 80' and early 90' used to mosh to. If you dig this style, check this out!

Bad Attitude is a new band from Leeuwarden (Netherlands) area with members of Cornered, Pantah and 0fight8 with a mission to go back in time with their sound. Their first demo is filled with raging, in your face hardcore that kids in 80' and early 90' used to mosh to. If you dig this style, check this out!

Bad Attitude has members of 0fight8, Pantah and Cornered. So, who does what in the band and how did you all get together?
We have Jurre on drums, Erik on bass, Maurice on vocals and Niels on guitar. We got together because we are all from the same area. Our other bands played shows together, we travel down to see other bands together and eventually decided to start a band together.

What was your major motivation when you decided to start jamming together?
To start a new local band that doesn't suck. Jurre and I had been talking about starting a fast hardcore band together, booked a rehearsal space on a friday night and shat out five crushing tracks.

Is this band a side-project or a regular band?
It's a regular sideband project.

I guess many kids like the 80’/90’ vibe of your demo. What prompted you to play this type of sound?
Our mutual love for hardcore the way it used to be. I guess we all got tired of the newer heavy hardcore kind of bands that just want to write the heaviest moshparts and the coolest singalongs blended together.

Are there any particular bands that you think had the biggest influence on your songwriting for the demo?
I can only really speak for myself on this one. I listened to a lot of Striking Distance, Face Value, Floorpunch and Agnostic Front while writing the songs we have so far.

Best show you played so far?
Our third show in our hometown in a new squat with Pantah, 0fight8 and a French streetpunk band that covered the Exploited.

What type of shit usually happen at your shows? How hard kids dance in Netherlands?
Well you get a good handful of our friends show up and drink a couple of beers with us right before the show, they watch our 5-minute set full of excitement and drink a couple of beers with us afterwards. Then we hit up a local bar, the dancing usually doesn't start until then. Erik will forget how the second song of our set goes, I break a string during the same song, Maurice thanks the audience and Jurre smokes a cigarette.

The scene needs new blood, but at the same time when some things get popular they get watered down and stripped of substance. What’s your opinion about attracting new kids to hardcore without making it too soft? Shit like pay-per-view gig streaming or crowd surfing for hardcore bands - do you think it sucks or should we all join 21st century?
I really don't think the last generation has made the hardcore scene soft when I go to Germany and the UK and watch these little fuckers punch the crowd like theyre at a Shattered Realm show. Thing is though that most bands more or less sound the same. I guess with the pay-per-view thing you mean this year's BnB Bowl which I think was pretty cool. I stayed up til 4 in the morning to see one of my all-time favourite bands and they delivered. I didn't really care paying a measly 6 dollars to watch a decent stream. Crowd-surfing is what happens at lame festivals with too many people. I don't really care too much it's a development like any other and I believe we're better off embracing them than to shun everything that's fresh or different from whatever old farts have been doing. The 21st century really isn't all that bad and as far as I know it wasn't all that great all the time back in the 80s or 90s. New kids are going to be attracted to hardcore no matter what it sounds or looks like, that's what's so cool for new kids, just because we think everything was better 5 or 10 or maybe even 15 years ago doesn't mean it can still be cool as shit to them. I felt really welcome when I got into hardcore a decade ago and I hope kids that get into it today can say the same thing. Otherwise it's an ending thing for sure. That's enough sentimental bullshit from me for now, who gives a fuck if kids jump around like a wounded duck on stage wearing a beanie in the summer? Who died and made you a fucking fashion expert trying to look like a guy on the back of a cd-cover wearing a 30-year old t-shirt you bought on eBay??

What’s next for the band? Are you already working on new songs?
We've already written 3 or 4 new songs that make our old stuff sound like your girlfriend taking a shit.