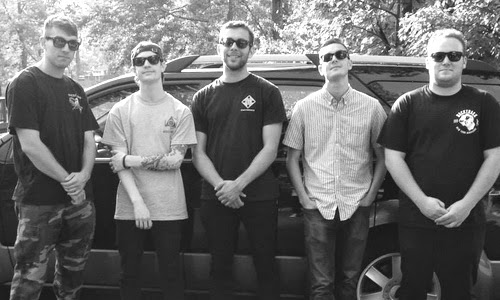 Miss My Chance is a new blood from Long Island, NY. They caught my attention when they dropped If & When ep earlier this year. It's just two tracks but they both rip with anger and a vicious delivery. Hard vocals over powerful riffs and tight drums is a no-brainer, but this band managed to pull this one off. Show these dudes some support, check out the interview.

Miss My Chance is a new blood from Long Island, NY. They caught my attention when they dropped If & When ep earlier this year. It's just two tracks but they both rip with anger and a vicious delivery. Hard vocals over powerful riffs and tight drums is a no-brainer, but this band managed to pull this one off. Show these dudes some support, check out the interview.

Alright, first off, If & When dropped this summer. Gimme us the overview!

Our EP, “If &When,” is pretty much the prequel to a ten song LP we’re in the process of writing. We felt like those two songs, “If (And Only If)”/”When (And Only When),” bridged the gap between our EP, “Unless,” and the stuff we’re writing for the LP. I’d say the new material contains a lot of the same elements that Miss My Chance has possessed from day one, but amplified in every way we could think of: Harder, heavier, faster, and overall- darker.

Do you work with any label to release it on a physical format?

For “If & When,” the plan right now is to release it on cassette as a promo tape for the LP. Included on that would be the two songs from the EP, along with a demo of a new song called, “Gateway Drugs,” and a reprise version of an old song, “The Spiral March.” Our friend, Brian Giwojna, runs a small little DIY label called, “Crackin’ Up Tapes.” I believe we’re going to release this with him, just as we did with our demo, “Jump The Gun.” We’d love for our LP to be pressed on vinyl. I sincerely doubt we could fund it ourselves, though, so we’ll see if label support becomes a possibility. 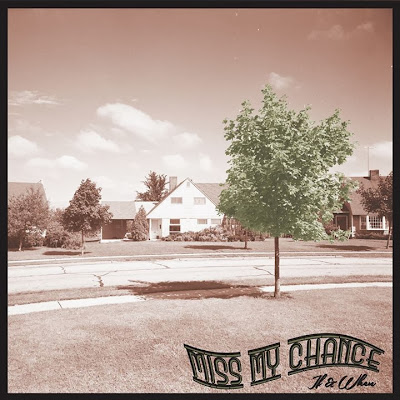 What’s the story behind the artwork for If & When? Is there any deeper meaning to it beside being a picture of a boring suburb?

That same friend I mentioned before who runs “Crackin’ Up Tapes” did the artwork for us. He told me it’s an old photo taken in Levittown, New York during the 1950s. I suppose that’s the extent of the picture itself. When we approached him about the artwork, we didn’t have anything in mind, so we didn’t know what to expect. When he first showed it to me, my face lit up because I think it fits the tone of the record perfectly. Brian is our go-to-guy for designs and whatnot. He’s been helping us and supporting us since the beginning. We love you buddy!

Your lyrics are more complex than the average hardcore band I listen to, but I dig it. Where do you get your inspirations and are some of the ideas or values that you hope to convey to the listener?

Lyrics are extremely important to me. In a lot of cases, a band’s lyrical content will either make or break them for me. Whether I’m writing them or reading them, I like a challenge. The inspiration I get can come from anywhere and everywhere. It could be a single trigger word that resonates with me, or a conversation I overhear two people having. The ideas are always present, but something that comes out of the clear blue sky (or outer space, as our guitarist, Tom, would say) is what brings those ideas to life. With the two songs, “If &When,” I wanted the listeners to hear the change in tone from the problems presented at the beginning of each song and the solutions I try to offer at the end of each.

To break it down, the song, “If,” is about failure and how a lot of the times, it can come from within. If you’re constantly waiting for all your stars to align before you start pushing forward, you’ll never reach those certain things that are so much closer than you may think. In short, it’s about taking your shot and leaving doubt behind. The song, “When,” comes from the darker depths of my mind. This one is basically about knowing when something is over, letting go, and moving on. It’s about finding your innermost courage, and venturing into the unknown. If the question’s always, “When?” then the answer better be “Now.” The overall statement I think this band tries to make is, don’t miss future opportunities because of past experiences. Take risks and allow yourself to be vulnerable.

Who would you say are your main musical influences?

My friends have been and always will be my main influence. Seeing people I genuinely love and care about do awesome things by creating music is something I’ve taken great joy in all my life. Other than that, the band that got me into present day hardcore is Have Heart from Boston, Massachusetts. I had been listening to punk and hardcore stuff for a few years before I heard them, but they changed the game for me. They made me want to be an active part of the hardcore community. Another band is Title Fight from Kingston, Pennsylvania. Seeing their success brings me great joy because I literally watched that band grow up. In fact, it’s almost like I grew up with them because we’re about the same ages. The rest of our band draws a wide variety of influence. Our guitarist, who writes the songs, says the two main ones for this band are Trash Talk and The Offspring.

Who are some of the bands you have done shows with? What other bands from your area do you support?

We’ve done a lot of shows on Long Island with a band called Bottom Out. They are fucking awesome, but I’m sad to say they don’t do much anymore. Everyone should still check out their 7” on Harvcore Records, “Mourning.” Other than that, we play with Recycled Earth from Hudson Valley. Check out everything they have done. Also, we’ve played with Blind Justice from the Jersey Shore a few times when they’ve rolled through Long Island. We haven’t played with this band yet, but check out Hell Mary from New Jersey. Collectively, we play in a few other bands, too: High Card, Polaroids, Depressant… Scope it out on Facebook and Bandcamp if you so desire. 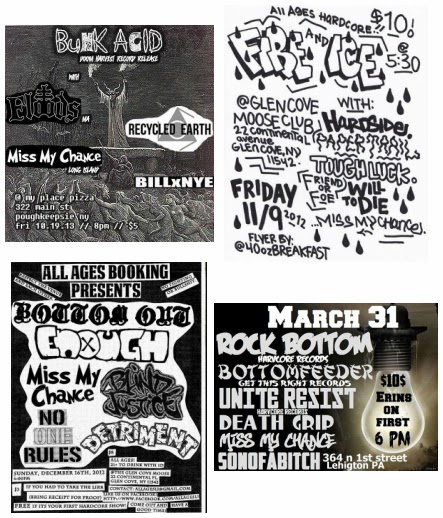 What do you guys do for fun in your spare time and what kinds of jobs you have?

Our guitar player, Tom, works as a lifeguard over the summer and as a substitute teacher, year round at the High School near his home in NJ. Our other guitar player, James, works as a security guard at some random park on Long Island and also works in a bike shop a few days a week. Our drummer, Sal, works for his girlfriend’s dad doing construction stuff. He also power-lifts. Our bass player, and newest member of MMC, Mike, goes to school full time at Fordham University and recently got an internship in NYC. As for me, I work in the photo department of a shitty convenience store/pharmacy on LI. When we’re not writing music, in school, or working, I’d say usually we’re going to shows or traveling. Most of us like sports, too, so we play a little bit and go to games. Whether it’s hockey, baseball, basketball, or football, I think we all like at least one of those. Lastly, keep skateboarding alive. Long boards suck. Do an Ollie.

What’s your opinion about the government shutdown? Being based in Europe I got no idea how’s the situation over there, but are people freaking out?

To be completely honest, I don’t know much about it. At least where we’re from, no one is really freaking out about it- or even talking about it. That’s either a good thing or a bad thing… probably a bad thing. From what I gather, it’s all due to politicians acting like children rather than adults. A friend of mine posted this on Facebook and I think this paints a nice, clear picture:

Do you know how to handle a gun? What’s your opinion about the gun control in US?

I do not know how to handle a gun, nor have I ever even held one. Our guitar player, Tom, however, does know how. He’s an Eagle Scout, so there’s not much he can’t do. If you want him to tie you a noose, he can do that, too. I digress… Guns don’t bother me too much. I definitely think gun control is critically important. The distribution of firearms must be heavily regulated. However, I don’t think taking away one’s right to bear arms solves a damn thing. The crooks and criminals will get their hands on guns, either way. The focus should be turned more towards the police force. What are they doing/being trained to do in order to crack down on violent crime? I don’t know much about this stuff, so I won’t pretend I do. Just thinking out loud…

Never have I ever been a fan of professional fighting or wrestling, so I couldn’t even name you one. I will say this, though- I’d love to see our drummer, Sal, in a UFC fight. Someone’s going to need to challenge him.

Firstly, I want to thank you for taking an interest in our band. We really appreciate any and all the support we can get. Other than that, just make sure you always keep an eye on Long Island Hardcore. King Nine is releasing an LP, “Scared To Death,” on November 23rd of this year on Mass Movement Records (Record release show is on the 24th). Also, Incendiary put out an LP, “Cost Of Living,” earlier this year on Closed Casket Activities, and Backtrack is releasing an LP on Bridge Nine Records, “Lost In Life,” due out next year. Our LP will also be out sometime in 2014. Lastly, shout out The Miss My Youth Crew (worldwide) and The Hatebrigade.