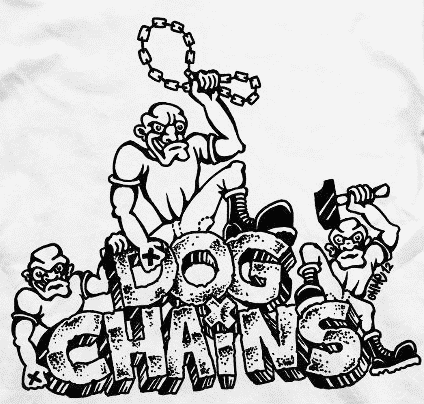 First of all, Dogchains is a dope name for a hardcore band. These Germans will be dropping new Give / Take 7” that blend Boston/NY influences and bring the feel of the stuff good bands were putting out in 80’/90’. The ep is a collab between Straight & Alert, Life To Live Records and Balance Records and features 6 tracks which are really aggressive and fast, but also have just the right amount of groove. This is the kind of hardcore made for going wild out, definitely. The rockish vibe in these tracks makes you feel like going years back when much more bands were doing this type of sound. The band have shared the stage with likes of Mindset, Cold World, The Mongoloids, Expire, Rotting Out and that’s the company they fit in I guess. Two new tracks can be heard on their bandcamp and they’re tight as hell. You can order the ep through here. Don't want to sound too excited, but you'll be doing yourself a favor by seeking it out.

In other news, Straight & Alert will be also releasing a tape from Jack Move, a new band from Paris with ex and current members of Cut Loose, Get Lost and Money Time. Fans of angry and fast hardcore in vein of Mental, Outburst, Lights Out and The Rival Mob should check it out.