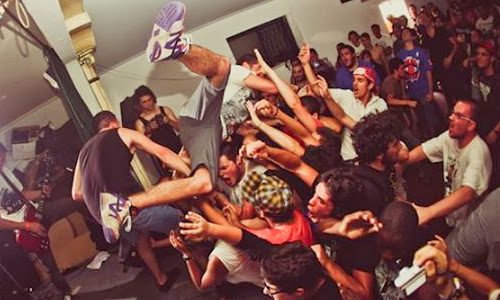 Reality Slap is very cool band from Lisbon, Portugal playing aggressive yet groovy type of hardcore. If you're into bands like No Turning Back or Madball, this is your stuff right here. The band seems to be under the radar outside of their country which is a shame cause they are totally on point with their music and lyrics. Read the interview, support legit bands in Europe!

Reality Slap is very cool band from Lisbon, Portugal playing aggressive yet groovy type of hardcore. If you're into bands like No Turning Back or Madball, this is your stuff right here. The band seems to be under the radar outside of their country which is a shame cause they are totally on point with their music and lyrics. Read the interview, support legit bands in Europe!

For the people who are reading this and have never heard of you let them know some basic info about the band, like how long have you been together and where you’re from?

Hi everyone, first of all thank you for this interview, big up to Hardboiled Zine. We are Reality Slap from Lisbon, Portugal. The first idea of the band started around 2005/2006 with just me (Johnny) and Gus. We were long time friends and started putting some riffs together for fun, nothing too serious. Later maybe around 2009 we decided to properly record so we asked a friend to help us with the drums, after that we started to look more like a real band and started playing live. From the first formation me, Gus and Tim still remain in the band that also has Gaiola and Tiago as members.

You released new album recently, what’s up with that? Are you happy with the feedback you’re getting for it?

Yeah we released “Necks & Ropes” in early 2012 so it has been already some time now since it came out. We’re very happy with it, I think we managed to get it to the point we wanted. You can still absolutely tell that it’s Reality Slap there but with a twist to it, in the sense that we didn’t just copy what we had done before and tried to level things up a bit. The feedback from our friends and the crowd has been great.

Do you have any some personal ideals, feelings, politics, etc. that you try to put forth while writing lyrics?

Yes absolutely, we think that hardcore always had, has and will always have a political side to it, either it is from the social issues that band talks about, their ideals or just the will to change something. It’s not just that but it’s definitely there. In our case with this new record we decided to address more social issues and political. The concept of the album is about control and lack of freedom from people. We kinda tell a story that starts with people being clueless to the agenda of the elite and governments and through the record we get to “open our eyes” and decide to act. We think it’s important for people to start getting informed of what’s around them and question things instead of just accepting everything as it is cause the truth is in most cases being kept from us all. We use the word “dead” a lot in this record as a metaphor to being ignorant and “blind” to what’s happening. 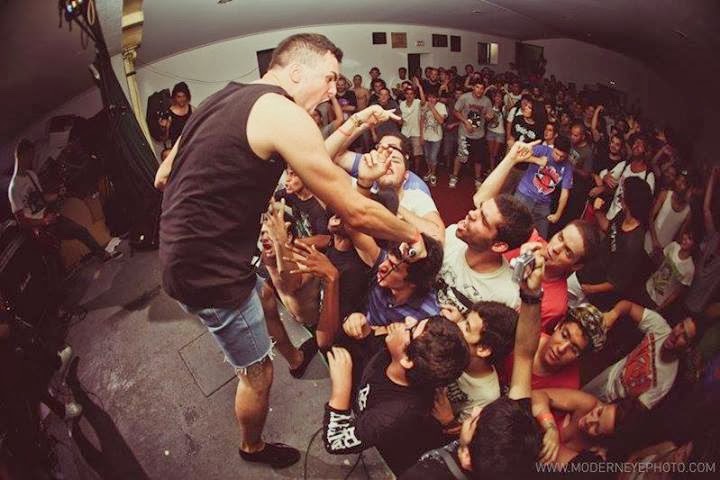 How did you managed to get some many guest spots on the album? Was it hard to piece everything together?

We were so happy to manage to get those guests on the record. I used to go on tour filling in playing bass with another band from Lisbon called Devil in Me, I got to know Justice from Trapped Under Ice and we got to be friends, so naturally I asked him to record a song with us and we wrote his part together on tour. With Winston from Parkway Drive was a bit different, they played in Lisbon and Reality Slap opened for them. Winston watched the show and really liked the band to our surprise, so after the show we chatted a bit and decided to have him as a guest on the record. He recorded in Australia after we sent him the song. The other two guests are our long time friends, Poli and Mike that are brothers so we decided to have them on the same song. Mike also recorded the drums of “Necks & Ropes” before Tiago joined the band cause we had no drummer at that time.

Who are the bands that influenced you when writing the album?

We were always influenced in the beginning from bands like Agnostic Front, Breakdown, Cro-Mags and Dmize, although I don’t think we sound too alike. This record as I told before we tried to get a bit away from our early stuff, so we got a bit more of a metal influence maybe in some songs but always straight to the point and with short and direct songs that are one thing that defines us. We always have this aggressive and fast way to put our songs together, and that we got from old bands from the 80’s and early 90’s.

What about hardcore scene in your area? What are some other hardcore bands from Portugal that we need to know about?

We have a pretty solid scene in Lisbon, I’ve had the chance to travel a lot on tour and I can tell that although we’re from a small country in the extremity of Europe, our scene is quite strong. Either with bands, or through small promoters, people making zines, kids going to the shows, everyone does their part and helps this DIY movement. As for the bands you should check out: Devil In Me, Steal Your Crown, Grankapo, Overcome, Death Will Come or Shape. There is a lot of new blood as well like Awake, Backflip, The fall apart, Push, Same Old Chords, Clean Break, Challenge and so on. Hope I didn’t forget any other important band as well.

What type of hardcore is most popular in your area (posi? nyhc? beatdown? metalcore?)

Can’t really say, I don’t like to classify bands or to label bands within hardcore. Hardcore is hardcore. There’s definitely a lot of NY influence in some bands, usually older bands, but the bands in Lisbon are very diverse in my opinion. 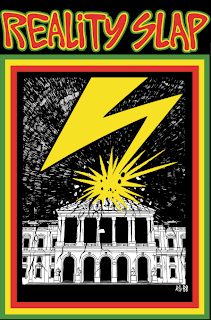 Straight Edge has been actually getting more popular again recently. I think in the last few months maybe at least 3 new straight edge bands were formed. Clean Break (with members of Pointing Finger who was a very important sxe band in the Portuguese and European scenes), Awake and xVenenox with both new kids in the scene and older guys. This is great cause Straight Edge is a really powerful and positive thing in hardcore hope those bands keep doing what they´re doing.

Do you feel like too many kids focus on the image side of hardcore more than the music and message?

Unfortunately yes. I think it’s a general thing that is happening with the younger generations. People are being formatted to not think and be superficial, that is a general problem that takes place not only within hardcore. It’s sad, but also I think the kids that matter, that have something to say and that love this scene they don’t care so much about those things. The message and the energy are the most important aspects of our scene and you can only fake to understand it and live it for so long. And come on, let’s be honest, only ugly, fat, horrible and smelly people play in hardcore bands, so those fashion poser kids don’t hang around for long anyway ahah. Many young people in Europe are fucked up nowadays with high unemployment and economic uncertainty. Do you feel the economic situation in your country is an obstacle for running a hardcore band?

The situation is really bad right now, we’re going through tough times. Most kids don’t have jobs right now. Portugal is one of the European Countries with the worst economical situation at the moment. Unemployment is so high right now that a lot of families are moving out of the country in search for an opportunity to survive. Having an Hardcore band always involves a lot of sacrifice, not only financially but personal as well. The economic situation doesn’t help at all cause it’s hard for the few guys that have jobs to just go on tour and risk their positions, or spend the short amount of money they have with rehearsals and musical equipment. Like the “Cro-Mags” used to say ‘Hard times are coming your way
You're gonna have to rise above it some day’.

Give us a little bit of an idea on what the people can expect to see from Reality Slap in the near future?

We’re preparing some small tours in Europe for 2014, so if you’re around make sure you come and say hi. We’re also writing new stuff to record this next year as well, so expect some new tunes in the near future. We’re very excited for that and we predict 2014 to be a good year for us.

Thank you once more for this interview and for helping us promoting the band. We hope to see some of you who might read this soon in a show having fun with us. Keep the good work with Hardboiled Zine, best of luck. It’s important to support the scene, so keep involved and keep doing stuff. RS Puro Cless.