New Blood: Back Down 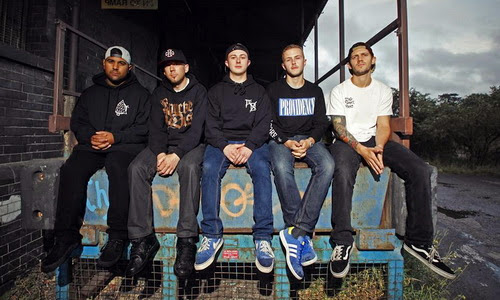 Back Down hails from Bristol and so far have a demo that dropped last year, which was then followed up by Against All Odds EP that came out earlier this year. They play hardcore that while fast and dynamic, stays on heavier side of things, not unlike Terror or Madball. If you like this style, there's much to love about that new ep. Check out the interview I did with Tom who does vocals for the band.

Back Down hails from Bristol and so far have a demo that dropped last year, which was then followed up by Against All Odds EP that came out earlier this year. They play hardcore that while fast and dynamic, stays on heavier side of things, not unlike Terror or Madball. If you like this style, there's much to love about that new ep. Check out the interview I did with Tom who does vocals for the band.


Can you introduce the band and tell us where you are from?
So we are Back Down, from Bristol city ,Uk. Theres myself (Tom) on vocals,Ash on Guitar, Burrows on Guitar ,Benji on Bass and Adam on Drums

Tell us something about Against All Odds. How long was it in the making and how do you feel about it when it’s finally out?
It took us about 7 months in total to write and find the songs we felt were best for the Ep,we recorded it over a 4 day period with our friend Oz Craggs over in Folkestone,Kent at Hidden Track studios, I think as its our first release we are stoked with how it came out, its heavy enough to go nuts to yet also easy enough to jam out in your room and listen to.

I know it’s on bandcamp, but has it been released in any physical format?
We are putting it out through ourselves,you can get it on our Bigcartel, and also Clenched Fist records, the guys over there are doing distribution for us in europe, which is great and we can't thank them enough!

What are your main musical influences?
Thats always a tough one, we all listen to loads of different stuff,would say our main influences are probably Hip Hop,(Myself and Ash are HUGE fans of Hip Hop),Hardcore especially NYHC and then UKHC bands such as Stampin Ground and Knuckledust,Grime,Drum N Bass,some Metal, ,this is the kind of stuff we all listen to whilst in the van travelling to shows anyway,to be honest if i listed all our influences we would be here for days.
I guess its cool when you can just get five guys, all on the same wavelength in the practice room or studio or whatever and just make music that we enjoy playing, we all agree on one thing,and thats the fact it must be HEAVY.

What kinds of themes have you been exploring in your lyrics?
I wouldn't say my lyrics have an exact theme although theres definately some conscious political themes in some of them,the world is too oppressed by governments and elite families these days i really feel that humans as a whole need to wake up to whats around us, they lead us to wars we don't need to fight all for the sake of money and things like that,its selfish and its wrong.I guess theres a whole bunch of different meaning in the lyrics really, i want people to listen to them and be able to relate in one way or another, you know if one person reads it one way another person could have a completely different view on the meaning.Just take them as you see them, your perspective is right.

What is band’s gig history like? What’s the craziest show you played?
So far gig history wise we have been extremely lucky to play some awesome shows with some great bands, we have a whole bunch of people helping us throughout europe and we've been really lucky i guess, the guys at Rucktion Records have helped us with a few shows which have been amazing, and i would probably say most of them bar one or two have all been pretty crazy. Like i say we have been really lucky with shows, we even played with Biohazard which was great as growing up i used to listen to them a lot! 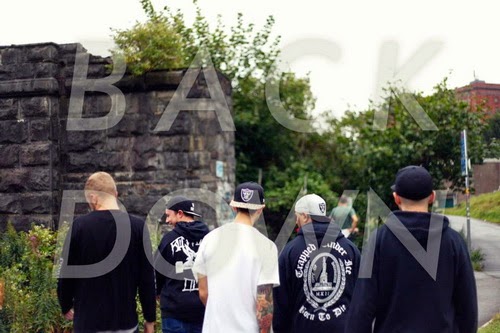 What is scene in Bristol like? Any good bands from over there?
Bristol is going off at the moment, theres some dope bands about, a few i'll name are True Valiance, Dogfight, Murder Circuit and Dead Mans Chest (although only the vocalist is from Bristol it still counts) the scene is going from strength to strength at the moment here in Bristol, a few friends of ours put on shows under the name BCHC presents and everyone is tight with each other so its great, we all hang out at the shows and everyone is really good mates with each other, BCHC on the rise!

And generally how do you feel about UK scene at the moment? It seems to be really strong nowadays.
The UK is really strong at the moment, there are some great bands about and it seems to be unstoppable right now! Theres been a lot of work put in from from certain promoters recently putting on big alldayers and festivals i hope that it continues to grow, the UK has always been overlooked when it comes to music as a whole, but on the hardcore side of things right now all i see are very strong bands coming from here so theres no reason it can't get stronger.

What kind of things are you listening to right now?
Me personally im digging a lot of MF DOOM, Lloyd banks recently dropped a dope mixtape and Hardcore wise i would say im digging what I've heard of the new Tempers Fray release, Cold Hard Truth, Broken Teeth,Cold World, Backtrack, King Nine, Turnstile, Everybody Gets Hurt, Resurrection, the list goes on to be honest.

Finally, what are you looking forward to for the band rest of the year?
The rest of the year looks great, we tour europe in april with our friends from Cast Iron Jaw, then in july we are playing a slot at Gdansk Tattoo convention in poland, also we have a little weekend coming up with Cold Hard Truth, everything is looking good!

You can find more about the band here: facebook.com/backdownukhc