Guts Out caught my attention with the self titled ep they dropped in January - with pretty much every track on it being incredibly dope it rapidly became one of my favourites. The band doesn't break any new ground, but it works classic NYHC hardcore style with considerable skill and aggression. Take my word for it, without mentioning any names, it can give a lot of more hyped bands a run for their money. Anyway, as I want to have more bands from Europe featured on this blog this year, Guts Out were an obvious choice.

Guts Out caught my attention with the self titled ep they dropped in January - with pretty much every track on it being incredibly dope it rapidly became one of my favourites. The band doesn't break any new ground, but it works classic NYHC hardcore style with considerable skill and aggression. Take my word for it, without mentioning any names, it can give a lot of more hyped bands a run for their money. Anyway, as I want to have more bands from Europe featured on this blog this year, Guts Out were an obvious choice.

For those who might be not familiar, tell me a little bit about the history of Guts Out. How exactly did it get started?
Alex: Yo. Guts Out are: Dmitriy (lead), Artem (bass), me (vocals), Ivan (drums) and Kirill (rhytm). Actually we started in April 2012, at first we didn't consider our band will turn into something serious. Just wanted to play some badass straightedge stuff with rough lyrics in Russian. Russian is the key word, 'cause there was, and is, too many local bands singing in English, despite the fact most of them aren't into it at all.
First line-up was: Dmitriy (he played drums at the beginning), Artem, Sergey (guitar of The Occult band) and me. After few rehearsals Sergey became too occult to play with us. Dmitriy took guitar, then we invited Ivan from DoublexCrossed (we played there together with Dmitriy) to play drums and Avtandil from Rearranged to play rhytm. In december 2012 we recorded and then releases our first demo tape with this line-up, but then Avtandil left in the beginning of 2013. That was the time Kirill joined us, before This Is Moscow fest in february. That show was crazy.

You sing in Russian which means I get like 10% of what you’re screaming. What are some of the topics in your music that you want to share with the kids?
Alex: You know, through lyrics I'm trying to express my world view, the way I see social environment. For example, in one of our songs I stress the problem of drug addiction, but the lyrics of this song make an impression as if I address a particular individual. It might seem quite personal, though I'm glad to see these lyrics come home to guys, to see these guys sing along at our shows.

Do you plan to stick to singing in Russian, or do you consider recording couple of songs in english as well?
Alex: As I've already mentioned, Russian language is the best option for us, although sometimes it's easier for me to write lyrics in English (then I translate it to Russian haha). I don't know why, but that is it. Still, we have to respect our local scene, most of guys there don't get a word in English. Still, Russian language gives our lyrics a breath of fresh air. So, I suppose, we aren't going to change our course in terms of language.
Artem: Sure, we’re going to keep singing in Russian. I think that’s a rare thing here now. Almost all bands try to sing in English except for some of ‘em. Of course that makes it harder to spread the message because no one except Russian-speaking hardcore kids and partially other Slavic-languages-speaking understand what our lyrics are about. But still, maybe it’s also something exotic an appealing for them.


"Russian language gives our lyrics a breath of fresh air.

So, I suppose,
we aren't going to change our
course in terms of language."
There is a strong NYHC vibe in your music, no doubt. What bands have influenced you the most?
Alex: That's great our music is associated with NYHC! As for me, I love early Madball, Leeway, Outburst, Breakdown, etc. But not only NYHC: I adore doom and thrash metal. Maybe that's why my lyrics are so grim.
Artem: Well, lots of bands have influenced us, and not only NYHC. But anyway I think bands that influenced our music the most are No Warning, early Madball, well even 25 Ta Life haha.

Hardcore is more than music, that’s obvious. So beside hardcore tunes, what are some of the aspects of this lifestyle that appeal to you?
Alex: First of all, it's straightedge. That affects all aspects of my life and, I hope, in better ways. Then, speaking about racial issues, neither I treat any race as a superior one, nor I contempt people because of their skin color: I hate racism. But there is only one thing I have to add here: Russian people are the worst.

Tell me a little about Moscow hardcore. What is scene like over there?
Alex: Unfortunately, I can't tell you more than a little about our scene. Better days have passed, the population at shows is reducing, many great bands have disappeared. Obviously, there is still a bunch of bands playing regularly here (including Guts Out), but nostalgic thoughts sometimes flash through my mind.
Artem: Well, the scene is in decline now. It’s been in decline for a long time already. Gond bands broke up, venues are not overcrowded as years ago, new bands are not as tight as before, people don’t care about anything, he scene is completely split into many subscenes. Well, Russian hardcore is dying having convulsions.

Is it a tight knit of kids over there? Is there much unity in the scene?
Alex: "Where is the unity? Where is it?"
I can't exactly answer this question. Our scene is split. I suppose, it sounds familiar to anyone involved in hardcore scene. But where else you can see a group of bullies appears and intimidates, then beats a guy who posted a negative comment about the band one of these guys belongs to? Disgusting.
In fact, I have friends there, they're like brothers for me. What else I could wish for?
Artem: As I said before – lots of subscenes which have no or almost no contact with each other. The biggest still united part is antifascist punx and skins scene. But maybe it’s not as unified as it seems too, I don’t know.

Any bands from over there we should check out?
Alex: There are many many bands to check out in Russia, but I'll give you my top-3 of currently playing bands:
3. Degenerative Behavior. Moscow punx. This band's name speaks for itself. For example, I'll give you possible translations of their song titles: "My penis", "Whore", "Fuck my face up", etc.
2. Gorilla Troops. Saint-P thrashers. They play in vein of 80's thrash metal bands. Great guys.
1. Nosebleed. Saint-Petersburg straightedge. Their killer DEMO'12 never leaves my playlist. Sounds aggressive and tough. Also you should check Your Mistake band! Two guys from Nosebleed are involved.
Artem: Well you should definitely check out Gorilla Troops! Also Your Mistake is a great new band in vein of early AF (http://yourmistake.bandcamp.com/). I also like Burnt Cross – it’s a band from Novosibirsk (it’s far far away from Moscow somewhere in freezing depths of Siberia; well any place in Europe is closer to Moscow than Novosibirsk), they play ‘holy terror’ influenced metal hardcore (http://burnt-x-cross.bandcamp.com/). And one of my favs, not from Russia, but anyway, the gem of youth crew in our non-youth-crew days – Clearsight from Ukraine (http://clearsight.bandcamp.com/). Those were quite new modern bands worth listening. But some Russian bands that I truly love are old ones – so also don’t forget to check out Skygrain, RAY, Breakwar, 5 uglov 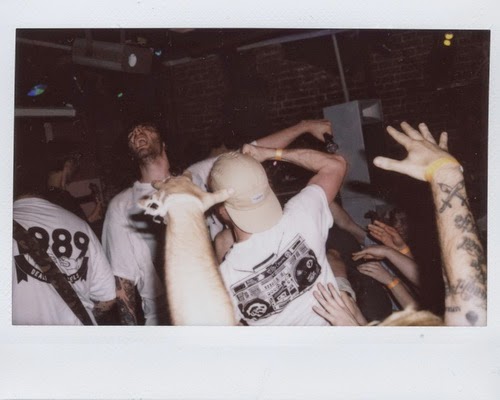 What’s the craziest shit you’ve seen at a show in Russia?
Dmitriy: oh yeah it was stage bottles show and when i came into i saw all
punkrockers took a photo of something. after if i saw the Drunk sleeping naked guy with decorated black face like chumazik. it was
Kirill: For me, the craziest shit I've ever seen happened at This Is Moscow festival in 2013. While Daydream were playing, some random guy wearing yellow hoodie came up to the stage, asked the crowd to empty some space in front of him and then just dived from the stage into the floor. It was the funniest and the craziest thing I've ever seen at any Moscow show.

Favorite underrated band from Russia?
Alex: Many overrated bands there. But, if we talk about underrated ones: TUSK. I still remember all of their shows I visited. They don't have records, but I still remember those riffs. Describing their music, I see it as a mixture of Infest and Crossed Out. By the way, our drummer Ivan played there.
Artem: TUSK only and forever.

Even the toughest hardcore bands are sometimes scared to go to Russia. Do you have many problems to get bands from abroad to play in Moscow?
Alex: Yes, bands which tour Europe rarely visit Russia. But I'd rather think that it depends on people who organize shows here. And it's often too expensive to make a show taking into consideration the fact that Russia is really hard to visit as I know. Also it's too risky for guys who make shows, because, for example, only 60 people visited last Strife concert in Moscow. Unfortunately, considering last steps Russia took in international political sphere, it could become even unreal to get a band from abroad to play here. What a shame.

And finally, what can we expect from Guts Out for the rest of this year?
Alex: I don't know exactly. We have many plans. I can't predict how are we going to manage with new releases. As for future shows, we are gonna visit some Russian and Ukrainian cities, play with Take Offense and Cold Stare in Moscow and so on.
Artem: Incarnate Fest in Moscow this May, MAYAK Fest in Odessa mid-Summer and some local shows here and there. Maybe also a 2-3 song record.

Any words of wisdom to wrap this up?
Alex: Speaking about words of wisdom, how wise can I be if I'm only 21 years old? I can only say that I appreciate the chance you gave me to speak about one of the greatest things in my life.
Thank you for your questions and for your attention!