Down For Life hails from Los Angeles California and delivers a nice blend of traditional hardcore with oi! sound for fans of Patriot, Discipline, Bruisers, Agnostic Front and so on. You get the picture. The band knows their craft and I am really into their recent record called Comin' Out Swingin' so it's cool they said yes to the interview. Everyone should read it, but especially those of you who are currently unemployed, drunk or on the run from police.

Down For Life hails from Los Angeles California and delivers a nice blend of traditional hardcore with oi! sound for fans of Patriot, Discipline, Bruisers, Agnostic Front and so on. You get the picture. The band knows their craft and I am really into their recent record called Comin' Out Swingin' so it's cool they said yes to the interview. Everyone should read it, but especially those of you who are currently unemployed, drunk or on the run from police.

Tell us some background on Down For Life, like where you’re from, how long you’ve been around, line-up etc...
Well as far as where we all stay at, aside from Dylan, we're all spread out through the San Fernando Valley which is the northwest corner of Los Angeles. Dylan is from Castaic which is like 20-30 minutes north of the Valley. We've officially been Down For Life for a little over a year now and things seem to be going pretty well for us. Somewhere in early 2010 I had started The Hardknocks with Anthony and Ray. After a while we brought Tony on to play second guitar and 2012 saw another line up change where we moved Tony to bass, Anthony to lead vocals, myself to guitar and brought Dylan on to play second guitar to make The Hardknocks a 5 piece. After a few shows we decided to call it quits for various reasons, but we all still wanted to make music and play. So we brought Mike on bass and moved tony to drums and called it a new band, but Anthony decided to step back due to some personal things he had going on outside of the band. So I stepped up to vocals and brought Devin in on guitar. This is the line-up that we recorded our 6-song demo with last year: Dylan/Devin-Guitars, Mike-Bass, Tony-Drums, Myself-Vocals. This last year we've really been hustling and busting our asses to play s much as possible and with as many different bands as possible. It's really been awesome, we've gotten to play with so many of our heroes and we're really grateful for it, The Blood, The Business, Stomper 98, OFC, Control, Pressure Point, Forced Reality, Yellow Stitches, The Authority. Things have been moving really fast. Unfortunately, Things we're working out with Devin. It sucks because he's a good dude and a great guitar player. So to fill the gap, Mike moved to guitar and his brother Gabriel has come on to play bass. 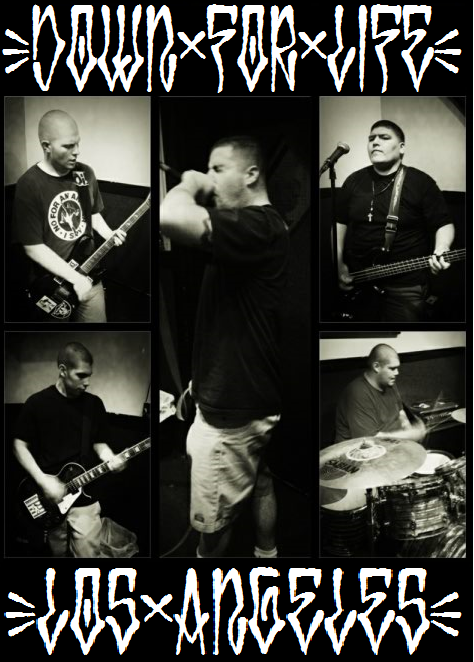 What does the name represents? Is it down for life for hardcore/skinhead/punk way of life, or is there deeper meaning to it?
It's not to be over-thought too much haha. Honestly when we went to record the demo we still didn't have a name worked out. Down For Life seemed to be everyone's favorite track so we just ran with it. I guess really it means Down for the Skinhead/Punk rock/Hardcore scene. The song's about people who turned their back on me, turned their back on the crew, and ultimately on the scene. So basically all we can say at the end of the day is that we're here to stay...

Hardcore punk and patriotism is a combination that kids in Europe are having hard time wrapping their mind on. What does it mean to you to be an American? Thinking about USA today, what are some thoughts that come to your mind?
I love this place, I might not love the people running it, but this is my home. Everything I've ever learned, I learned it here. This is where i went to school, where my family is at, Every friend, every enemy, every show i went to, every girlfriend I've had, every memory i have...you get the point. It all happened here. I'd love to travel but i couldn't imagine living anywhere else. I think a lot of people take the freedoms we have here for granted. It's definitely not perfect, we have our fair share of problems, but we're afforded a lot of luxuries that people of other nations are not. Shit, even CLEAN running water is something that plenty of other countries have to do without. I think people that complain about living in this country should take that into account. If you don't like we're you live, than move. It's plain and simple.

What’s LA hardcore/punk scene like?
Hmmmmm, I don't know, everything's pretty divided in terms of scenes. Hardcore, Skinhead, Punk rock, unfortunately they're all kind of they're own separate entities in a sense. That's not to say that their aren't plenty of people into all of it, but its rare to see a mixed-genre show in that sense. We're hoping to change that in the coming years though, at least a little bit anyway. And even within the skinhead scene, LA is a huge place and there's always a lot going on. Sometimes there's nothing popping off, but sometimes there might be 2-3 shows in one night in different areas. So that makes for thin crowds sometimes. In general though there are plenty of people and it has the potential to be a really strong scene. Honestly we've kind of had a hard time catching some peoples interest out here. I think it throws people off that we don't look like Joe Hawkins action figures and that we incorporate a lot of HC elements in our sound. It's a little hard for the "super skin" crowd to digest, i guess. There are plenty of people that love what we're down though and that support it thoroughly and for that we're really grateful. Other than that we get a hell of a lot of awesome bands out here, especially lately. Just In The last year or two we've had Menace, Crown of Thornz and Cro-mags, Death Before Dishonor, The Business, The Blood, Stomper 98, Hudson Falcons, Yellow Stitches and Forced Reality and a bunch more that I'm probably forgetting. So we're definitely lucky in terms of the shows we get.

What are some other bands from your area you’re down with?
The Hardknocks
Hold The Truth
Street Value
Tried and True (Our Homeboys from up north!)
Since We We're Kids (and all their other bands Blood Stands Still/MDK/Level 4)
The Warlords
Backbone
Aggroculture
The Authority
Footsoldier
Y.A.P.O.
Oh, and Cimewave is back!

If I forgot anybody, my bad! 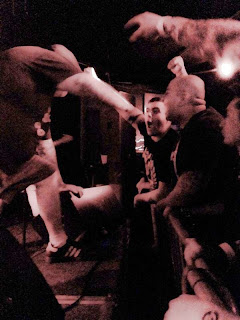 What do you guys do for school or work or whatever?
Mike works full time as a porter for Honda and part time at Petsmart. Dylan works at Blimpies making sandwhiches. Gabriel was working full time at a grocery store called El Super and part time with me and going to school, but he recently was promoted at El super so he had to leave my job. Congrats by the way! I work Full time doing receiving for a Light bulb/Conduit fitting "manufacturer" and I'm going to school at night to get my structural steel welding certification. I'll let tony explain what he does since we're both doing this interview.

If you ever went to prison, which prison gang would you want to join?
Uhhhh I would prefer not to go to prison, but i guess south side...

What do you guys have coming up as far as new music and shows and stuff like that?
We're coming up on 3 days with crucial change through out So Cal with crucial change, one show with The Authority and HFL and another is with Cold Stare so that should be a lot of fun. Then the week after we're heading up to San Jose for Underneath the Underground fest which patriot is headlining so we're all really stoked on that. as far as releases, we're always working on new material and the next release is going to be 2 brand new songs on a split with us and the hardcore band i play bass for, Hold The Truth. I'm really excited about this one.