Terrible Minds straight from the depths PAHC bring that beefy, tough hardcore everybody loves. Their recent record Devolution is absolute ripper, full of ignorant, pitbull-like aggression and pissed-off, fuck-you attitude. I suggest everyone into hard-ass hardcore like No Retreat, Krutch or Menace give it a listen.

Congrats on the release of your recent record Devolution. Give us some overview, how do you feel about it and the reception it gets?
We've gotten a lot of positive feedback from it from a lot of really great people. We're proud of how it turned out, but it makes it so much better hearing it from others.

Is there any type of message in your music that you want to send to the listeners?
Just be yourself, don't give up on your goals, and always keep your head up. Stay true to the people around you that you love and you can achieve anything.

What part of PA are you from?
Altoona, PA 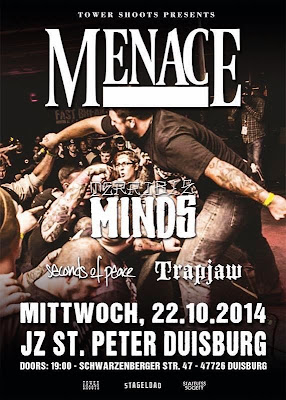 What are some pros and cons about living in PA?
The pros: You'll find a lot of great musicians and great people in PA that are very passionate about what they do.
The cons: The weather sucks about 50% of the time, but you get used to that when you live here.

What are shows like in PA?
They're pretty awesome. I think the feeling is a bit different at a PA show compared to at other places, but maybe that's just because I'm from here.

What’s the craziest shit you’ve seen at a show?
I saw a kid eat a bite of a dead bird he found in the parking lot. That was pretty dope I guess.

What initially attracted you to the hardcore culture; was it escapism, music, or the thrilling sensation of going to hardcore shows?
The music and the reliability. We all have pretty diverse tastes when it comes to music, but hardcore was always there for us.

How important has an influence from the PAHC legacy been for you? So many classic bands came from that area, and so many great are still around.
Strength for a Reason, Barricade, Wisdom in Chains, and Steel Nation were our main influences from PAHC. If it weren't for those bands and their predecessors, our band simply wouldn't exist.

Tell us what’s the scene like out there in PA at the moment?
The scene is strong. That's the beautiful part of hardcore, even in tough economic times, passion and dedication for the scene shines right through.

What are you looking forward to for Terrible Minds in the future?
We have a split that we're releasing with our good friends in Dementor (Altoona Hardcore) for early 2015, we're gonna drop a video for our song High Side, and we have a few other things in the works with some friends of ours around here.

Is this world worth saving?
Absolutely. There's plenty of good people left.

We wanna shout out: Menace, Dementor, and City of Snakes and the Central PA Hardcore scene, Troy Mort and Railroad City Tattoo, Matt Winrick and the Railroad City Brewery, X's for Eyes, The Railroad City Murder Machines, Pennsoulvania, and Three High (put yo threes up). Big ups to our ex-guitarist Bart who contributed a lot to our band. We thank you, homie. Most importantly, the kids and the promoters that have helped us out over the years and inspired us to continue to work to make our dream happen.