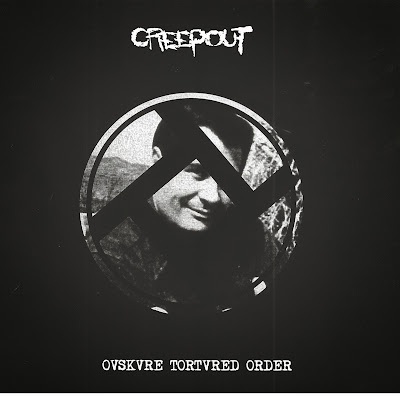 Japan’s reigning kings of hardcore Creepout come back with new ep which was put out by FWH Records as MCD (as far as I know, there’s a vinyl version of the release as well). One look at the front cover and you know they carry on with their Cleveland worship thing. Everything about the package, from the layout to the logo (designed by Dwid himself) screams Holy Terror. They are trying hard, to the point some might call it biting a bit too hard off of Integrity/In Cold Blood style, but since there’s nothing bad about the music as such I have no problems with that.
With the music taking a similar approach as band’s previous record, a split with Integrity, Ovskvre Tortvred Order brings on the heavy, metallic side of hardcore with a grim, negative twist. I remember Tribe Called Hardcore had more NYHC/OLC flavor to it, but this time it’s all darkness and depravity.
The riffs are bit more technical than before, the music definitely got heavier and the overall vibe drifted much more into darker corners. The vocals are brutal like they should, dude’s doing great job.
I am not sure I get all the lyrics though, some of it sounds bit odd. It's almost like they were trying to sabotage this record on purpose coming with some cheesy lyrics like ‘Shut the fuck up and go away (4x)/ Fuck you bitch ass (3x) / I want you nothing’. It’s like Dwid going all out Rick Ta Life style. Either they were not giving a fuck at all or were trying too hard. I look at the lyrics are integral part of harcore, so this made record’s impact lesser than it should’ve been. But other than that, the record is dope. Check it out!