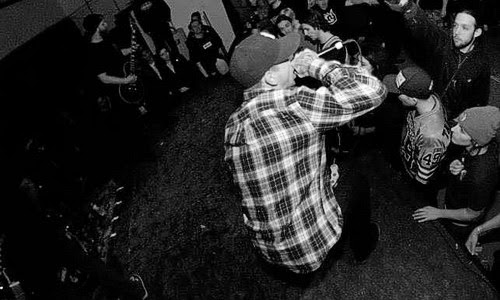 Society Sucker is straight up hardcore and I dig that 100%. When you were starting out did you have a clear idea what type of music you want to play or did it just happen?
In the beginning we just knew we wanted to be heavy but we also wanted to keep more melodic and "groovy" elements prevalent in the music, but we hadn't necessarily figured out exactly how we wanted to go about it. Our demo was our first stab at it but by the time the demo tape was out we had halfway written our EP where, in my opinion, we really found our sound. So I guess you could say it just happened, but we definitely wear our influences on our sleeve.

Your lyrics have some seriously negative vibes to them, where does this come from?
Everyday life. I work all the time, I have a house and a car payment, I have a son. I have a family to support and a whole world of stress and responsibilities on my shoulders at all time, and hardcore is my escape from that. My lyrics are a reflection of shit that I am going through or have gone through, things that I feel a lot of people can relate to. We don't try to be a "negative" band or push any certain sort of image though. 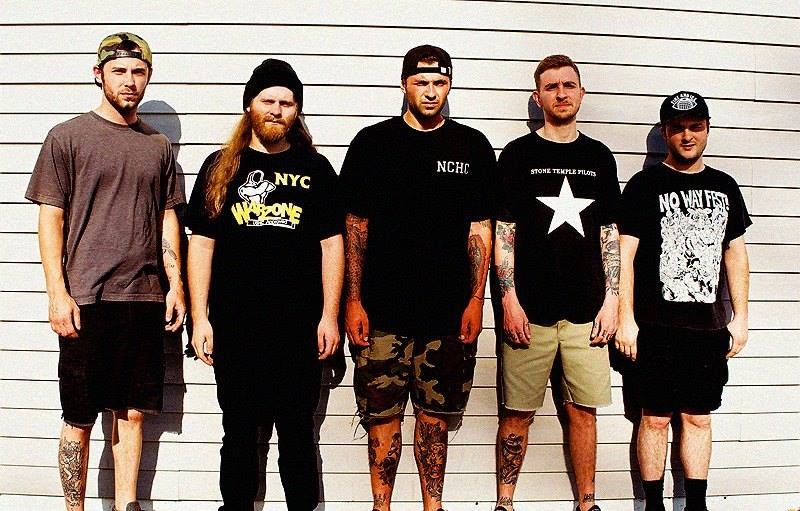 How did you hook up with Get This Right Records?
We played a fest with John's band not long after our demo came out, and after he watched us we started shooting the shit about the band and what our plans were coming up. I have known John and Dave who run GTR for awhile so once they brought up the idea of doing a record together it just made sense. They rule and definitely made sure that the EP turned out as cool as it possibly could, we are very grateful to have them on our team. 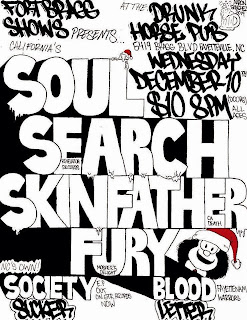 What is life in Wilmington, North Carolina like? Is it more Deliverance or True Detective type of South?
It is exactly as the TV show "Dawson's Creek" portrays it, in fact most of our new material is largely influenced by "Dawson's Creek." Especially lyrically.

Favorite Agnostic Front track?
Been listening to the "One Voice" LP a lot lately and I almost want to say something off of that, but I'll stick with my usual answer: The Eliminator. "Cause for Alarm" is the best AF album without question.

Who are some newer bands you’re a fan of?
Mizery, Will to Die, Vulgar Display, Discourse, Drown, Pain Tolerance, Sick Sad World, Eternal Sleep, Detain, Malice at the Palace, Point Blank, Cross Me...hardcore in 2015 is in such a great place and the amount of actual badass GOOD bands out right now is mind-blowing.

Do you follow European hardcore?
Yes! We love European hardcore, and it has always been very kind to us. I can't say much right now but we are actually working on a very cool project for this year that pertains to this exact topic. Shout out to Blind Beliefs, Forsaken, Ratel Records, and Street Survival Records. Hopefully we make it over there later this year too.

Before we wrap up, what’s the most important thing kids reading this should know about Society Sucker?
We aren't going anywhere.