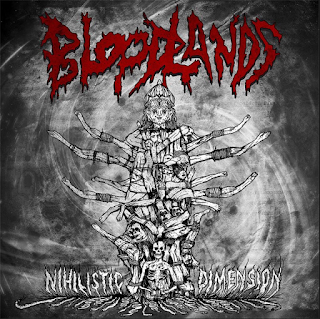 Bloodlands hails from Finland and features members of Ratface, No One Is Safe and couple other local bands that make you expect quality. What they offer is heavy, thick metallic hardcore with an old school death metal twist. This combination is more often a miss than hit, but they kinda get this formula right. Over past few days I’ve been really getting into this album and the more I listen to it the more I start to appreciate its strong points
.
While Nihilistic Dimension is not without its flaws, it is a very entertaining and solid release showcasing wide range of skill and ideas. Despite all the heaviness, the main vibe is hardcore, so it’s not straight up death metal and it’s definitely not deathcore. For the most part the music is brutal and to the point as they keep tracks time down around two minutes. The tempos range from slow to fast, and most of the songs are driven by thick midtempo rhythms, filled with tight riffing, tremolo picking, pounding drums and booming double bass. From time to time they toss in some badass solo, but it’s done in right amount. All the way throughout the album the band as a whole hold together tightly, these dudes know what they’re doing. The production is crisp, even sometimes too crisp for my liking as some more dirt and distortion would do this album good.

The record was put out by the band themselves, so if you dig their sound do your part and get to getting.