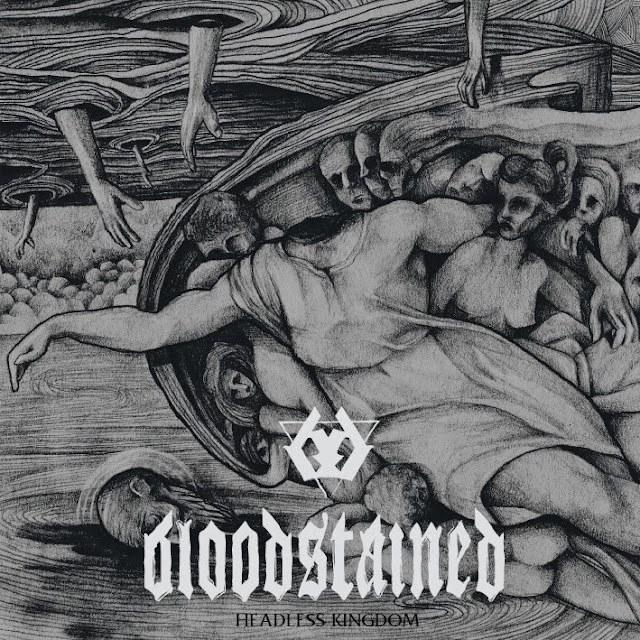 Bloodstained emerge from the depths of hell to drop filth and dirt into your useless life. There is a fury driving this record, most of the time it moves at frenetic pace filled with jagged riffs and crushing drums. Musically,the project is of a high caliber, the tracks are well engineered and hit in all the right places. I will go as far as to say they’re top of their weight division right now. The riffs, the vocals, the drumming - everything about this record is nothing short of a tour de force. The songwriting is on point and the way that everything they put into these songs flows together is genius. They deliver the brutality, but at the same time a lot of the riffs and hooks are memorable. You get drawn into the album from the first listen, and the more time you give to it the more you discover.

One thing that can be said about the music is that it is truly fucking evil. Not in a goofy meaning, but really brutal and depraved sense of a word. From the record packaging to the lyrics to the sound samples, the overall theme of the album is negative, as it was recorded solely as an output to share their bleak reflection of humanity and its dirty deeds. Exploring realities of life that turned into the intersection of cruelty and depression, the album does not leave much hope regarding where the human race is heading.

For one thing, Headless Kingdom actively invites comparison to Kickback or Arkangel, if not exactly musicwise, than definitely in the overall vibe. Shit, since Kickback days, Europe was seriously lacking bands that could create such dense and dark version of hardcore.

This is not a band that walks middle ground, but rather one that is confident about their style and message and has been taking it to the next level with each release. I am glad to see Bloodstained still going strong, having a deal with a label with a recognition and distribution like Filled With Hate is definitely a good thing for them. I hope this will turn more heads and they get attention they deserve.