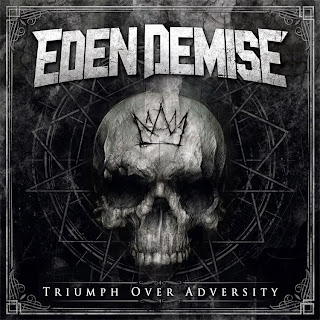 Eden Demise are a long running band from crisis-stricken Greece. Longtime readers will recognize this name, as I've done interview with them way back and also reviewed one of their previous records. I wasn’t even aware they’re still active, but it’s cool they haven’t given up. I guess all the problems their homeland is going through became a fuel for anger on this album. The music is a cross between early Hatebreed and late Throwdown, if that makes sense. There is a stamp of moshcore in everything from the album’s cover to song titles to music itself. This might be even too much mosh for some to handle at once. Although there’s nothing bad here as such, there’s not many killer tracks that really get the juices flowing. Some of this album is forgettable; but the highlights should work for the fans of the above mentioned bands. Compared to their previous stuff, the sound is much more into heavier territory, but still maintain the overall core vibe. This might not be my favorite style of hardcore, but I gotta admit it's far from bad. Plus, I respect the band that stay true to themselves and don't fake it.