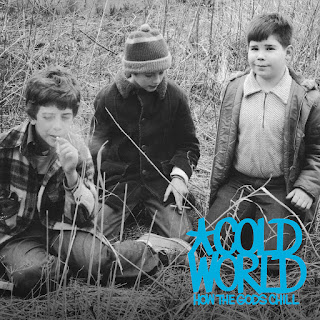 Given the average wage in the country I reside in, every decision to cop contemporary hardcore record is made after hours of deep economical consideration. Being an adult means you gotta do some heavy thinking and reason pros and cons of every move you make, cause at certain age moshing in your room on empty stomach has much less appeal than it had during your salad days.

But grown man problems aside, slowly I am catching up with all the overdue reviews of records I got in recent months but because of some stupid shit I didn't write. This time it's Cold World and How The Gods Chill. With records like this one, I doubt there’s a point in getting too deep into its content, The record has already been discussed by greater minds than mine and everyone has already heard it and got their opinion made up.

How The Gods Chill tries hard to uphold the legacy of Dedicated to Babies..., and it just might. Kids will be arguing whether it’s better than their previous shit, but truth is this is Cold World and they still got it.
Musically, it’s still rough hardcore stuff with whole arrays of sick riffs over pounding drums. Tracks like Never Knows Best or No More Fun And Games are nothing short of a winner. There’s an obvious NYHC influence and the way this band lays down that heavy groove of Crown Of Thornz or Life Of Agony is unbelievable. The guitar work is on some next level shit, and just the fact that some of the riffs makes me straight up excited says a lot. I get this feeling from like one in hundred albums I listen. Work of a genius. It’s one of those gems where you can sense a lot of thought went to each track of the album. I wouldn’t go too far saying that Cold World are a rule-breaker, they work within the hardcore tradition but they also put their own stamp on it. Every time you hear Cold World’s track, you know it’s them.

The vocals by Dan Mills are on point as always, he has an incredible ability to ride the groove of each song no matter if it’s fast or slow. His trademark gritty, harsh hardcore vocals mixed with hip-hop vibe are on constant display here. I remember I had hard time getting used to his vocals on previous records, but once it clicked I can’t imagine anyone else fronting this band. Dude is all over the album. The confidence and force in his flow is something that set him apart from most of the current hardcore vocalist. The lyrical content is another highlight. The overall tone of the lyrics is really down to earth, but it’s far from cheap gimmick. There’s a darkness to these tracks in a way they are describing everyday situations and hardships with brutal realism.

The guest appearances from both hardcore and rap people are cleverly used at different points of the album. I mean, god damn, Kool G Rap? I know it's probably the matter having the right amount of cash and you can have anyone rapping over your shit, but still the choice of rappers they invited to the project and the quality of rhymes is quality stuff.

Hard record for hard times. I put it on the list of my top records for 2014 and I still stand by this decision.