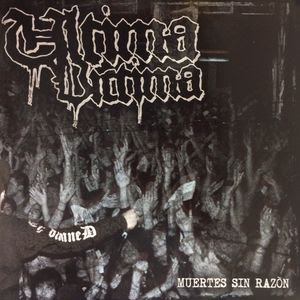 I guess Ultima Victima is one of the top bands to come from Mexico lately. The album is a blast of uptempo, dynamic hardcore that’s both knee deep in tradition with a heavier twist, taking a lot from classics like Sick Of It All (Screath the Surface era), Madball or Terror.. You can easily spot their influences from jump. It doesn't contain anything new, but they’re pretty good at that style. The music is laced with tight riffs and solid drum work. There are moments when they lose their shit, but also times when everything is tight. The production is really heavy, it’s like they were aiming for Hatebreed type of sound.
Although the band does have highlights on Muertes Sin Razon, the downside are the vocals. Sorry, I just can get to dig them. Dude does his best, but it’s just the vocals style I hate. His flow isn’t too aggressive and the tone of his voice gets on my nerves almost as much as this dude from First Blood. But once you get past that, the music is alright, I can’t take that away from them. The lyrics are in spanish, which is a plus, and what I can deduct they carry a lot of anger and pride. All in all, Muertes Sin Razon is not without flawis, but it’s not horrible.