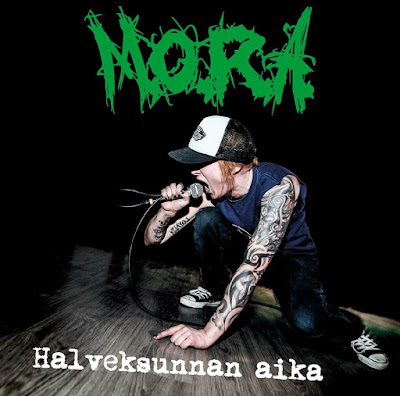 A DIY release that looks better than most of the stuff that is put on proper hardcore labels nowadays. The inlay is nicely put together full of live and crew pics, 25 ta Life style. This is type of shit I want to see more of. This is the second record I got for review from this band. If you have missed their debut CD, MORA plays heavier sounding old school hardcore with double female vocals. First thing I noticed is the production on this one is way better than before, every instrument is crisp but heavy. Musically, this is the shit. Every track is tight and powerful, I totally dig how they make them sound aggressive while keeping all type of stuff going on. Most of the time the music if fast, but there are some cool breakdowns and mid-tempo parts giving it more depth and just keeping the album more interesting. Take TyhJan Paalla for example, with it’s heavy groove, or straight up metallic Ajan Henki. Awesome! What is not so cool are the vocals. I got nothing against ladies fronting hardcore bands, but in this case they just are not up to standard set by the music. To me, they lack any sort of urgency or abrasiveness and because it’s hardcore I like to hear someone who’s seriously pissed. Nothing I can't get past, but still could be better. Props for singing in Finnish though.
Before I wrap up, I gotta give respect to the band for keeping it going on their own, without label backing, full DIY. This type of attitude deserves respect.
DIY, 2015