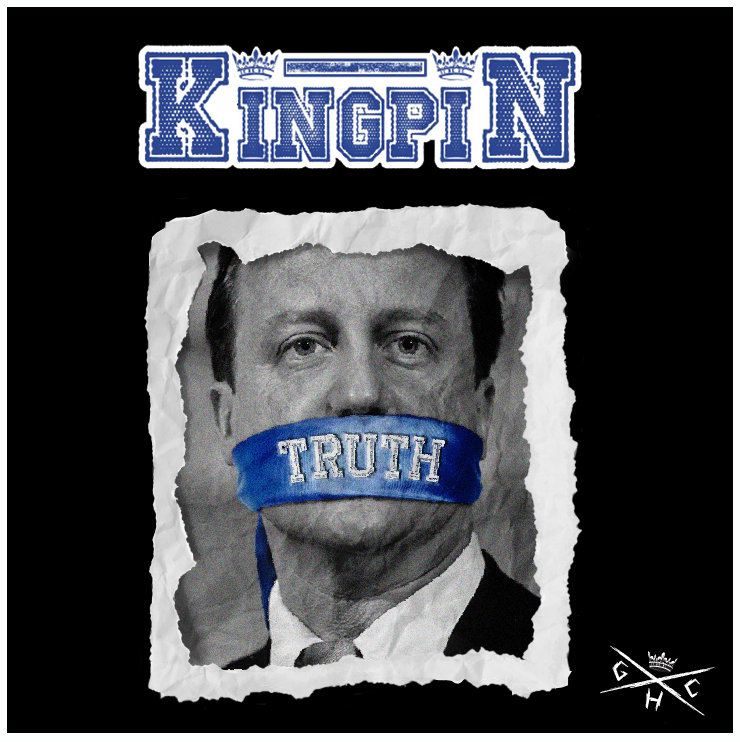 New blood from Glasgow, Scotland with influences from hardcore and crossover sound like Cro-Mags, Leeway, Merauder or Hatebreed.

To those not familiar with Kingpin, give us a rundown on the band.
Kingpin is currently a 5-piece Glasgow HardCore band drawing influences from thrash, hardcore and metal. Long story short, we are all about dem riffz. We self-released a cassette tape demo in 2013, a 7" vinyl titled "They Serve Themselves" via Germany's Demons Run Amok label in 2014, and just recently self-released a 4-track digital EP titled "TRUTH". We've toured up and down the UK and over in Ireland several times and played with so many of our favourite bigger touring bands like Sick Of It All, Iron Reagan, M.O.D., Negative Approach, Toxic Holocaust, Bane, Twitching Tongues, Exhumed, Code Orange and more and we fucking love every minute of the cool opportunities we've been blessed with as a band.

Who are your strongest musical influences and why?
We're named after the Leeway song "Kingpin". I sure as hell don't sing like Eddie Sutton - I wish I could! - but I think it's fair to say the Leeway mix of fast thrashy bits and hard breakdowns is pretty much the template we work from. In terms of more recent bands we like, soon after Kingpin formed we all went to see Power Trip supporting Bane and we all agreed that Power Trip were doing what we wished we could do, haha. We really chuck a lot of the classic thrash, metal and NYHC influences into our sound... Sepultura, SIck Of It All, SOD, Suicidal Tendencies, Merauder, Crowbar, yada yada yada. Every band says this, but we really just try to make the kind of music we'd like to listen to. 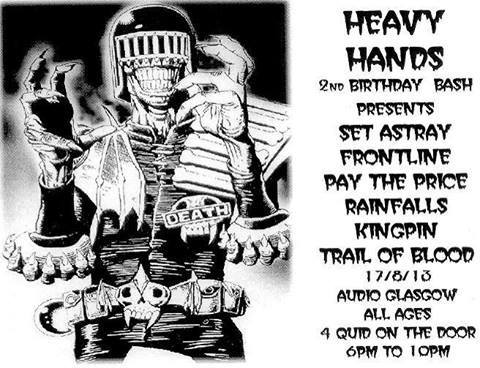 And where do you draw your inspiration from when it comes to the lyrics?
I try to write lyrics which address general social issues more than specific personal issues, I'm playing bass for a band called Eternal War just now, and Connor - the vocalist of Eternal War - writes these great, heartfelt lyrics which very explicitly reference his own life and experiences, and this seems very cathartic for him but I personally just can't get down like that. I'm pretty good at dealing with issues in my personal life as they happen, so by the time I go to write lyrics about that kind of stuff I've already solved the problem and / or just moved on from it. It's issues outwith my own immediate control - social and political issues - which sit and fester in my mind and make me really want to shout as loudly as I can.

And generally, politics in hardcore. Are there any ideas or movements within the scene that you support?
Any and all ideas and movements which revolve around just trying to be a decent, respectful person get my support! Obviously that means absolutely no time for racists, misogynists, homophobes, etc. Fuck 'em.

Tell us something about UNHCR. I really respect that you donate money from BandCamp to this cause.
The UNHCR is the United Nations' refugee agency who provide food, shelter, education and healthcare for people trying to leave horrendous situations behind and start new lives. Den took a brief sabbatical from Kingpin during the time we recorded the "TRUTH" EP, and the stand-in drummer we had at that time was a guy named George who got us a real good deal on recording at the studio he works in, The Audio Lounge. Since we lost so little money on the actual recording process, we decided it just made sense to release it ourselves and donate all the money from the paid-for downloads directly to a good cause rather than throw any proceeds away on printing and manufacturing costs for a physical release. We chose the UNHCR because the refugee crisis is such a prominent concern right now and the UNHCR seemed the most "hands-on" in getting the right help to people. 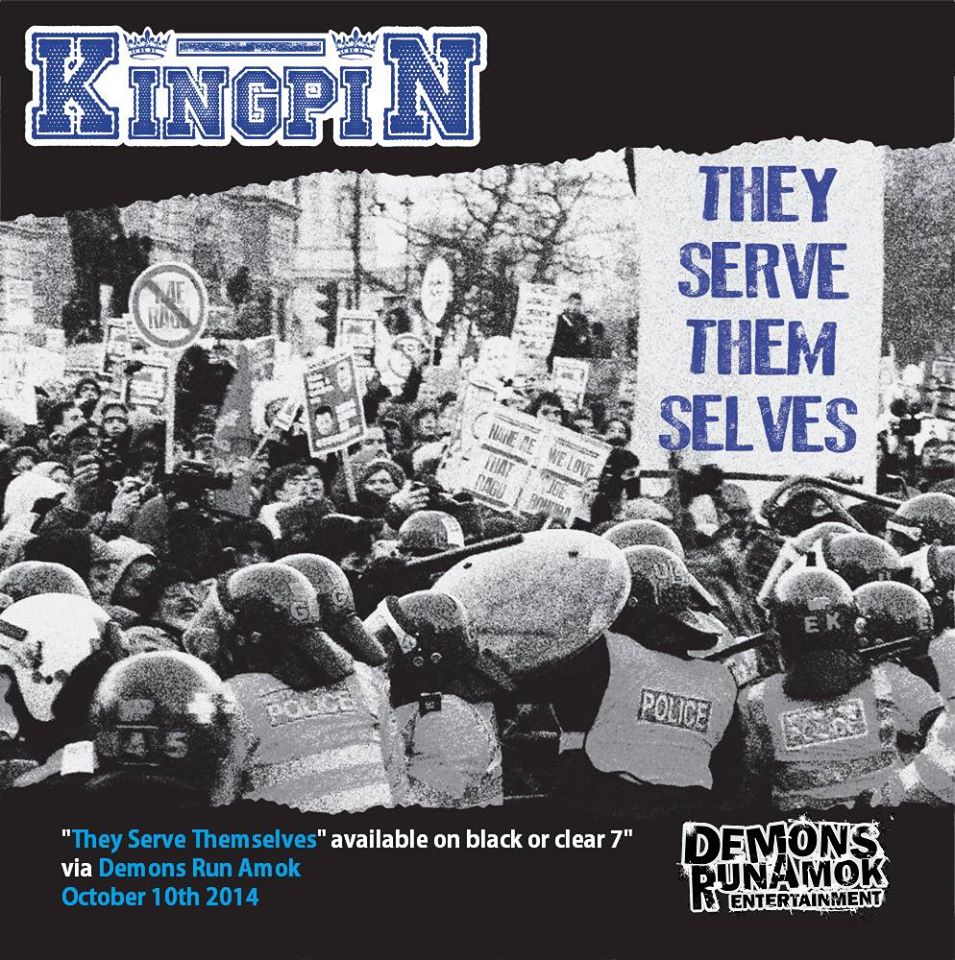 About the lyrics ‘They Serve Themselves’, is it based on personal experience? Have you had any problems with cops in UK?
I think it seems like police are generally a problem EVERYWHERE in the world, haha. The police should be there to help the public, not bother us. Police who care about public safety and dedicating themselves to making the world a better place DO exist, but they are few and far between. For most police offers it seems like their job is just something they coast by in to get to the next payday. It's "JUST a job", whatever. The first ever planned Kingpin show back in 2013 was shut down before we got a chance to play because some guy who fell out with the venue owner called up and made-up some bullshit about the show being illegal - which it wasn't - so Kingpin as a band have had issues with the cops from day 1! The police will come and interrupt a friendly social event for no real good reason, yet there are stories like one just a few months back where a car coming off the road on a motorway was reported to Police Scotland and it took THREE DAYS for anyone to get around to following up on this reported road accident. So one of the passengers of the crashed car, Lamara Bell, lay in a crashed car beside her dead boyfriend for THREE DAYS, and then eventually she also died in hospital, because the police couldn't be arsed checking out a car crash report. Quicker action could have saved lives there, yet the Police come out and shut down a hardcore show within about an hour over some unsubstantiated claim by some bitter former friend of a venue owner. Because it's just a job to them, and so many police officers aren't trained well enough to understand that the safety and wellbeing of the public are in their hands every day. "They Serve Themselves" isn't about any one particular experience but it basically tries to sum up a general lack of trust and confidence I have in the integrity of the British Police. 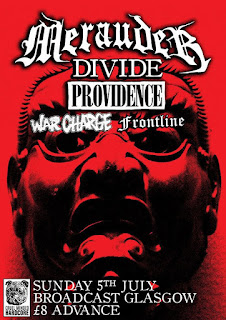 What was the first hardcore album that really had an impact on you?
"Age Of Quarrel" by Cro-Mags for me, personally. I knew a lot of people who were into punk when I was a teenager, and I dabbled in it myself because I liked the punk attitude but I mostly listened to metal because I just preferred heavier-sounding music. It wasn't until I heard that fucking rager of a debut record by Cro-Mags that I realised there was a genre that was an absolutely perfect fit for me.

And what does it mean to you to be involved in hardcore nowadays?
The sense of community and shared ethics that has prevailed in my local hardcore scene for as long as I have been a part of it is what keeps me part of it, I love seeing my friends and having fun at shows, and I love meeting new people and having even more fun playing hardcore shows on tour and seeing new places. "Being involved in hardcore nowadays", to me, means good times with good people.

What’s the scene in Glasgow like at the moment?
Honestly, I've been a part of Glasgow HardCore for a looooong time and it is more active with exciting bands now than I can ever remember. In addition to existing standout bands like In Tongues and the recently-reunited Divide, a lot of amazing new bands have cropped up in the last few months... EG Gaia Bleeds, Revolve, Deceit, Adjust and of course Eternal War. I see a lot of people all over the UK talking about how great Scottish hardcore is just now, so fingers crossed that momentum keeps rollin'. Every now and then a crop of new faces starts turning up to Glasgow hardcore shows as well, and it's encouraging to see more and more people getting into what's happening here.

What’s the worst job you’ve ever had?
When I was a student I was taking up all sorts of shitty jobs to scrape some pennies together, and one time I happened to get a one-off job delivering flyers for the council... Which probably wouldn't have been that bad a job, despite the fact it would've meant walking door-to-door in the middle of a really cold winter, but I'll never know how good or bad a job it would've been because I didn't actually get to do it. Everyone who was supposed to be doing the leaflet-delivering job met in a cafeteria pretty early in the morning, and I was a lazy student at that point in my life so "early in the morning" wasn't really something I was dealing with very well. I walked into this real busy cafeteria, I sat down at a table, I closed my eyes for what felt like a second and when I opened my eyes... There was suddenly NOBODY else around. Somehow I'd fallen asleep for about 25 minutes in the middle of this room full of strangers. I asked a guy who walked past where everyone else went, and he said "everyone's off delivering the flyers - no-one was sure if we should wake you or not so we decided just to let you sleep". Immediately realising I had completely fucked this simple job I only had to do for ONE day and that I would now get no money and my parents would kill me, I asked the guy if there was ANYTHING else I could do. He told me I could help pick up rubbish around the city; basically, I did what folk do for community service except I didn't even get to commit a crime to earn the pleasure. I rode around with this other guy, picking up rubbish in the freezing cold for about 8 hours. People are disgusting and leave some real fucking heinous shit lying around, haha.

What you have coming up that we can check for?
RIFFS. We should be playing a number of shows in the UK and Ireland with Hardships from England and Irish thrashers Hollow Truth at various points over the start of the year and we'll also finally get to share the stage with Power Trip during their UK tour in May. We are absolutely choking to get over and finally play the rest of Europe and / or America and / or fucking ANYWHERE AND EVERYWHERE this year as well, so if any promoters reading this wanna do a Meatloaf and make rock 'n' roll dreams come true then get at us - lev@kingpin-glasgow.com!