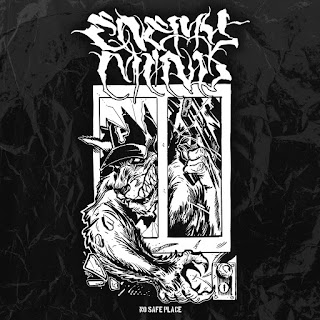 Enemy Mind is a name that ring bells in beatdown circles. The band released their self-titled debut in 2009, followed the same year by split with Line Of Scrimmage, but has been mostly silent since. So this new album can come as surprise cause many believed the band is long dead and gone. They’re not and this new record on BDWH is a proof. They always were on the heavier vibe but with these new tracks the band got heavy as shit with death metal influences all over. Not to say the core element is gone. Despite all that metal stuff you can hear where they come from and there are some hints of Hatebreed, Bulldoze or Built Upon Frustration breaking through from underneath the surface.

No Safe Place is not a bad record but it’s not like after first listen I couldn’t wait to tell people about it. The thing is that, I’m not so crazy about death metal, I can barely sit through entire Morbid Angel record. I can’ even tell you how this one compares to current standards for death metal. There were times when listening to this album I thought to myself I’d rather be listening to Madball.

The title is a play on sensitive college kids and if you’re offended that’s your problem. The band is from Pittsburgh and they don’t have safe spaces over there.

Overall, the album doesn’t do much to differentiate itself from the other metallic beatdown bands we’ve heard countless times before in recent years, but if you enjoy hadcore of that style, then it’s worth checking out.