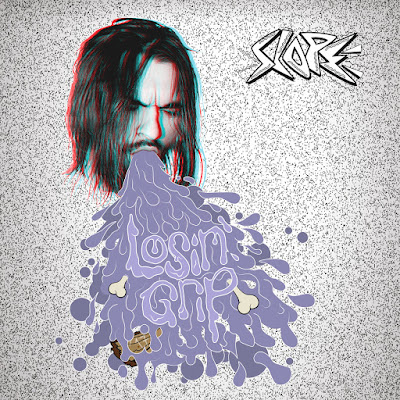 Slope is a new hardcore band outta Germany and this is their new album on BDHW which does not sound like what you would expect from this label. No breakdows, no snapbacks, no tough guy posturing. It’s more on that hardcore meets alternative rock vibe that’s been so hyped since Turnstile did it. Can’t say I’m much of a fan, but neither a hater. It’s just not my shit. Any day I pick the worst Madball song over best Turnstile track and it’s still a win. To each his own.

Looking at the front cover and seeing the video they did for Goodbye Mr. Dand everything was off to bad start. The band seems to be comfortable in the corners of the mind I don’t like to go. Meaning really abstract shit. I like when hardcore sounds like it could be a soundtrack to Rocky or Die Hard, but Losin Grip feels more like a backdrop to Charlie and the Chocolate Factory. The song names are all weird and I got no idea what they try to convey with titles like Goodbye Mr. Dandy. Some of this stuff seem unconvincing and if hardcore doesn’t sound sincere then I have problems having that emotional connection with it. At first I was forcing myself to go through some of the tracks because of that. I just felt at the back of my head something ain't right.

I am aware this review is going into negative direction but in reality it’s just me bitching. There are moments that I enjoyed. Musically, they do keep it sharp and there’s fair amount of fine riffing and tight groove to keep my head nodding. Like I said, fans of Turnstile should check it out, but also if you like Leeway, Burn and generally more creative NYHC sound I recommend giving it a listen.

Overall I think these dudes know they craft and I suppose there will be plenty people into this album. No need to put them down since there are tons of bands that are seriously whack, like Wolf Down and all their spin-offs. Slope are only guilty of being on a vibe different than mine but they seem like good dudes. Just with awful taste in clothes and there’s too much abstract shit going on in their heads. If they get their shit together and listen to right amount of Sheer Terror I am convinced their next record will be a killer. This one is still decent though.