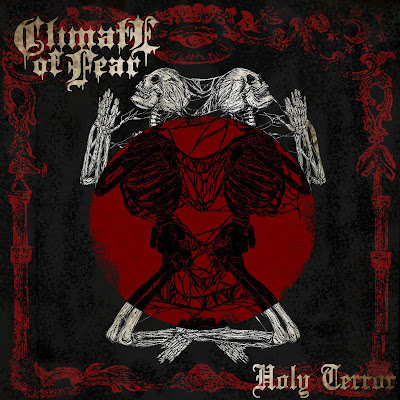 Debut album from UK's Climate Of Fear. The name of the band sounds familiar and to be honest I was hoping this one to be along the vibe of early Bitter End albums. Can you blame me? Turns out that was misleading cause the band's focus is more on heavier mid-tempo stuff than pure aggressive and reckless hardcore goodness. The two opening tracks are whatever but it gets better in the second half of this short album. Holy Terror is solid as hell, while Entombed sounds fucking great and is a definite stand out. The dramatic intensity of this latter track goes from menacing mid-tempo vibe to slick faster part and this combination is musical equivalent of timebomb.

You can hear they were aiming high when it comes to technicality and complexity in the music, doing what they could with the skills they have to make these tracks engaging and complex. This leads me to question some of their stylistic choices. There are just too many slower parts and 99% of them don't do nothing for me. I could have done without all those basic ass breakdowns they felt they need to do every 30 seconds of each track. That way otherwise brilliant songs, like already mentioned Entombed, don't flow like they should. I guess it's their weird way to show they can play but no one ever asked for that shit.

The production is crisp and clean, it's not bad but I miss the dirt and grime and reverb. Hardcore does not need to be overly produced.

All in all, despite me bitching about some stuff, it's still a solid record. Next time they just need to drop their ego and get rid of that metal wankery and stick to that more straight forward stuff.