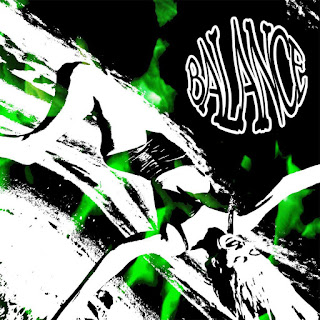 The latest release on Demons Run Amok is UK's Balance. I don't know if I got the press release right but this is marketed as UK's response to Turnstile. I couldn't tell, I don't listen to Turnstile. To me this sounds like a classic hardcore punk except it's more complex than average. Not too complex though. The band starts with that classic sound as a base but messes with it a bit and somehow makes it work.

The guitar work is nice with some weird stuff thrown in and melodies I can vibe to even though I'm too proud to admit it. I like that the more open minded stuff is never out in the front but rather smoothly mixed with the rest of the music. Not every band can play it straight but still keep it that varied. And what's best, they do melody but there's also a lot of chugging grooves in here. And yeah, they try to sneak in some alternative rock influences from time to time but it's well hidden and don't bother me that much.

After a short intro no one really asked for the first track hits it hard and there couldn't be a better start. The band even gets melodic on this one but it doesn't offend my manliness at all so I can hang with it for the most part. I dig the next track as well. Made For Living is short and in your face and they play it like they mean it. The next track is called Spill and is also solid. At that time I am pretty ok with all the nasty things they do to their guitars only because the music is still sharp enough to avoid the corny basket. The forth track is Out Of My Head and it's tolerable. Only the last track, Outro, doesn't do it for me, the lo-fi guitar thing sounds too soft for my liking.

While this demo is not the type of hardcore I fuck with on daily basis, it's still a good ride. I was expecting the worst but it's not that bad.