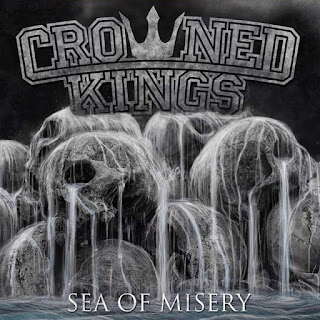 If you were raised on a heavy dose of Hatebreed and jam Lionheart on a daily, this record is for you. The cover, the band's name, the track titles like Grind My Teeth or Reign Supreme should give you idea what’s it all about. Definitely they were aiming for that Lionheart, Terror or recent Madball sound. Heavy on chugga-chugga but light on finesse, and with an ugly ass cover art. Technically, everything from guitars to rhythm section is solid, but also very calculated and they don't go too crazy with their sound. The production is thick and heavy, making it a case of recording budget well spent.

Lyrically Seas Of Misery is a mix of depression, pain and anger, but also strength and perseverance. Again, think Hatebreed and Lionheart put together. I don't know how much of it is their real life experiences and how much is making shit up cause you gotta have lyrics. On tracks like Reign Supreme or Dominate & Control they make no secret what they can do to people crossing them. Everyone having problems with, you know, being a stand up dude can listen to this shit and learn to straighten the fuck up and handle their business like a man should. And all the girls who want to bad ass can also get a lot from this album.