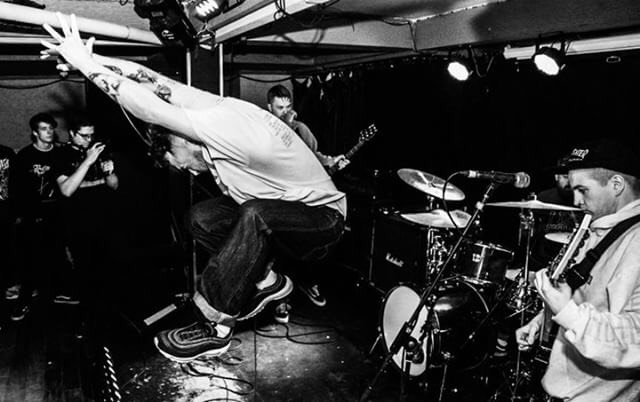 The promo tracks Last Wishes dropped earlier this year couldn't hit me harder. Ruthless hardcore with levels of energy that could be only a result of having to deal with some serious struggles in your life. The fact they're from Belfast makes me believe this could be true cause god knows this city has its shady side. Irish hardcore tends to be overlooked which could be working against them but these dudes could easily kick their feet up with European hardcore's elite. I hope Last Wishes get the credit they deserve and can’t wait to see what’s next for the band.

For those who don’t know - tell the history of the band. How and when it all started?
When we started in 2015 there wasn't really any active heavier sounding bands around apart from Stronghold & Frustration(one of the best modern bands ever) and not to leave out older bands like Crowd Control/2000 Strong etc. We just wanted to play straight up hardcore for the moshers. Our first show was actually Frustrations last one with Risk It from Germany playing too, abut 200 people showed up for them , it was nuts and was sick seeing them go out with such a bang cuz they deserved it! Originally we started with a different line up as well but didn't do much so really the band only started in 2016/17.

Two new promo tracks are No Solace and Survival Instinct. Can you explain the titles and the themes behind these songs?
They both come from lines in the song cuz I have trouble coming up with creative song names haha but they suit them I guess. No Solace is basically about how fucked society is, if you don't come from a wealthy background your automatically put into a class and it seems harder for common people to gain a lot opportunity's, if you end up homeless or jobless, who's gonna help you? You have to "know your place" essentially. Survival Instinct is about over coming mental health issues, trying to stay positive. The line "My instinct is survival" accidently works as a cheesy mosh call so you could say it has a double meaning haha.

What is the main driving force behind your lyrics? When writing what's the first thing that comes to your mind and what is the rest of the creative process?
Pretty much day to day shit/battling mental health, some people can be too afraid to speak up to say what needs to be said. Musically it's all Tommy, he usually comes with a riff or two that we piece everything around or i'll have some lyrics to send his way with a general idea to work from, it's always fun when we jam new stuff cuz everyone always has cool ideas to add into the mix. We have 2 songs previously written with an old guitarist but Tommy made them his own now and they're a lot better. Feels good to finally be heading in the right direction.

Can you describe band’s sound and style? Obviously classic NYHC comes to mind, but let us know what bands do you look up to when writing music.
You've basically nailed it on the head there man haha. When we started with other members we defiantly lacked some sparks creatively. Now that we have a solid line up I'd say our main influences are bands like Hatebreed / Merauder / Biohazard / Crown Of Thornz. We pretty much just write music that we wanna hear.

The 2017 demo was titled Stepped On Since Birth - what does that title mean?
It just means that growing up in a society that steps down on you from day 1 cuz you don't necessarily fit in with everyone else or want to fall in line. I guess all our stuff has the same theme haha.


I guess all our stuff has the same theme"
You did couple shows in UK this year. How did it go?
They were sick, we just finished a run with Cornered from Holland but John couldn't make it cuz of his work so we had our mate Aaron Jones from the GHC filling in on bass. Then the last Shedfest in Leeds at the end of may which popped plus a weekender with Revolve from Glasgow a little bit before that. All were awesome, love playing over there so hopefully we keep going back. 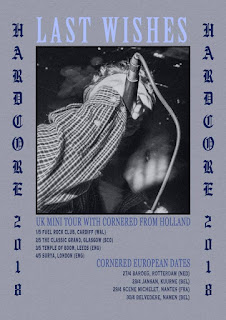 Do you play much around Ireland? What are other places with strong hardcore community apart from Belfast?
To be honest, not much latetly as we're trying to go over seas more and branch out a bit but we may have something cool this summer. There's a lack of new faces but things are starting to kick up again so Ireland is coming back on the map in a big way. If any bands wana come over, hit us up.

What music have been listening to lately?
Loads of 90's hip hop like Kill Army/Mobb Deep and the new Day By Day record, everything they put out just gets better and better. Also had Floorpunch on repeat cuz they're playing Outbreak this year, gona be wild.

Are you all from Belfast? For most people when they think Belfast they think violence and problems. Give us some insights of what living there means.
Well only Tommy is originally from Belfast, myself & Wilson are from small towns outside it but both of us grew up coming here. John's from Dublin, he'd kick up a fuss if someone thought he was from the north hahaha. I'm not going to bullshit you and say I know what it was like during the troubles cuz I was too young but I can tell you there's still negative/gritty sides to it and politics can get forced down your throat if you let it but it's not actually as bad as everyone thinks. Just kind of boring and full of idiot racists like everywhere else.

And what’s the hardcore scene like over there? Is it going strong or weak in terms of community, bands, venoues etc?
Belfast is kind of in a limbo state these days with the lack of bands kicking about. Growing up there wasn't any hardcore shows in the north to my knowledge apart from the punk scene, so it evolved from that in 2011/12 when the Warzone Centre re-opened. Then I started going down to Dublin, they've always had a strong scene with so many classic bands(Bang Bros/Frustration/The Blind/Nibiru) to mention a few. I'd been down to see bigger touring bands before but my first DHC show was one of the last or maybe the last Life and Death Fest, so many UK bands played like the Flex and Egotrip and it felt good to finally be around so many like minded people just a few hours away.

What are some local bands people should check out?
Some new Irish bands to check are Alter Ego, FFO: Killing Time, Breakdown. World Of Difference, a new straight edge band with ex Bang Bros/Frustation/Held Back. Also No Approval, the only Belfast band at the minute with members all from the north. The U.K always has sick new bands too like Big Cheese(Leeds), Rancour(Cardiff), xServitudex(Glasgow/Leeds/Birmingham), Bitter Youth(Liverpool) and All Fear Death(Glasgow). They all have bandcamps, check them out.

What can we expect from Last Wishes in the near future?
The next thing we're doing is recording 5 tracks in a couple weeks that we're super excited about so watch out. We also just got announced for Foundations fest in Leeds this September with Shattered Realm playing which is mental(shout out Mog LBU) and a show with Regulate, Candy,
Bitter Youth & xServitudex in November also in Leeds (again big up Mog for helping us out with so any shows). We wana hit Europe too!