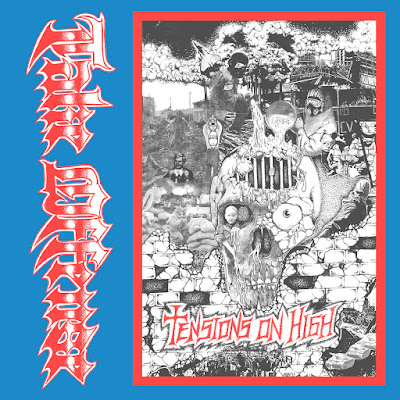 It's been 5 years since the previous Take Offense record, United States Of Mind, which is like forever in the music biz. They were on top of the game back then but then, disappearing for that long usually means line up changes or other drama that tend to make good bands go bad. So TO dropping new music now makes you think if they still got it? After few listen I gotta say hell yeah they do. I don't know what's the story behind them being lost all that time and why they're not on Reaper anymore, all I know Tensions On High don't suck. Definitely not a half-assed attempt to cash in on the old material but a legit heavy hitter.

Tensions On High is built more or less on all the elements that made TO famous. By that I mean taking a deep dive into 80' grittiness and putting their own mark on it. The band's progress is about expanding their sound within that arena. So apart from straight up crossover sound on A-side tracks you get nostalgic short instrumental Ometeotl that serves as a build up to epic Just Because You Believe. This last song is a stand out with a mid-paced groove and hard rock riffing that will haunt your ass for days.

It's a short ep with 4 tracks in total but each one of them delivers sheer density and force. There's no ego in their delivery, instead they keep it raw and keep it loose. Take Offense always had tons of badass ideas going to the studio and technical prowess to pull them off, but they never overcomplicate their shit and make sure these records have real balls.