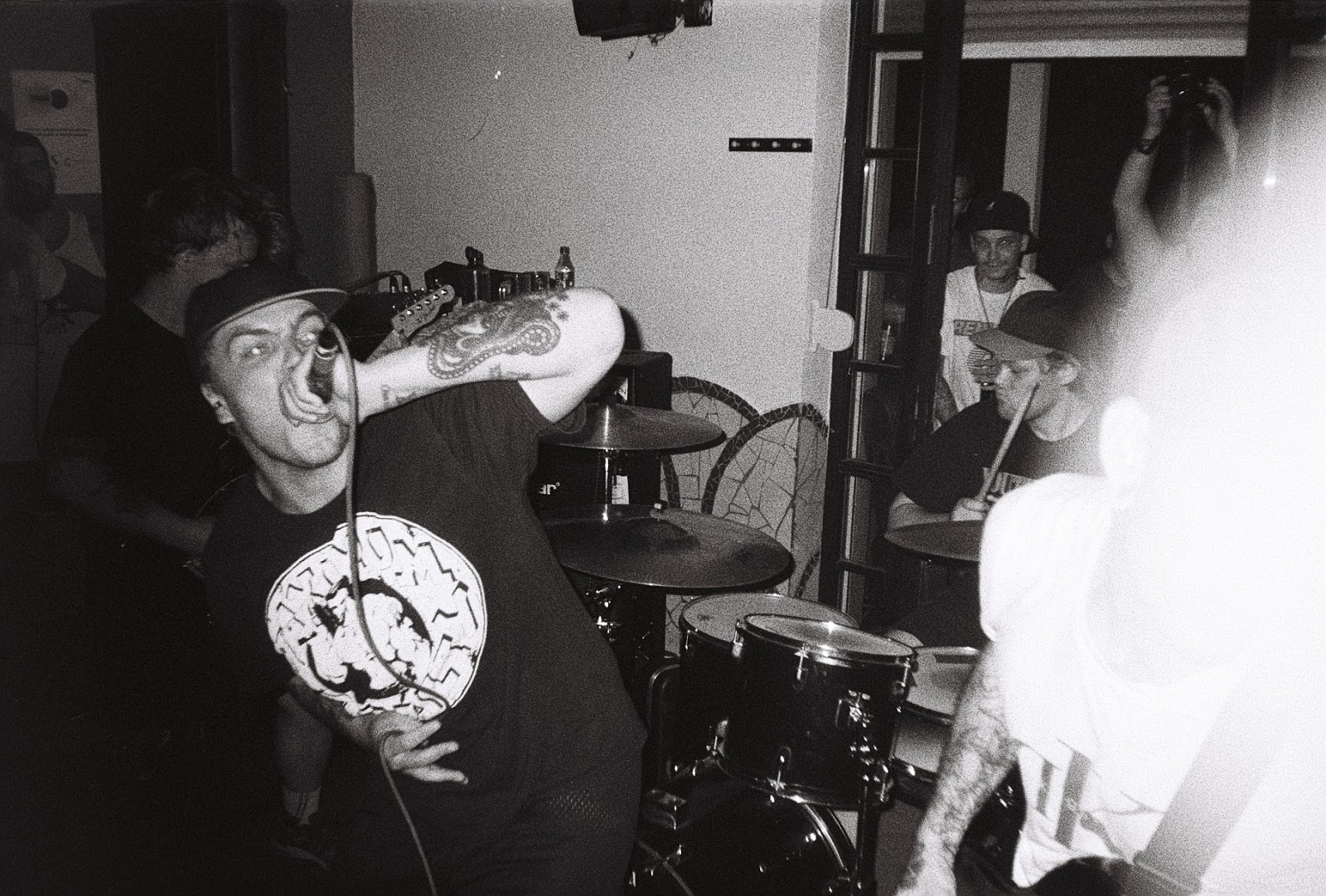 No doubt Into The Furnace by Sweden's Existence is bound for a high place on my best of 2018 list. My body wasn't ready for the amount of anger and fury these 4 tracks deliver. No lie! It has massive groove and spiteful vocals but even though technically everything is spot on, there's a fair layer of dirt all over. I don't want nothing to do with hardcore that's too perfect and polished, I don't like it. If it's not raw it ain't worth my time. I think these dudes think alike cause Furnace is darker and grittier than your average hardcore nowadays. Give'em a chance.

First of all, how did the Euro summer tour go?
The summer tour went very well. The response on all shows was overwhealming, and of course it's always great to be able to hang out with old and new friends.

Let’s talk about the new ep. The musical and lyrical tone and feeling of Into The Furnace is rather intense and bleak, how do the lyrics reflect the way that you view life and things?
The world is a cruel and unforgiving place. I’m just calling things as I see them. I’m not necessarily a negative person, quite the opposite actually. Writing lyrics and music is my sole outlet and it’s a key note in my way of dealing with difficult emotions and thoughts. Writing something, even just a word can spark a whole process of thoughts that may have been buried somewhere far in the back of my head. Other lyrics that comes across as more direct, still have some sort of sentimental line of thought that lead up to the finished product.

Attitude, knowledge, ethics - in your opinion, what does the best hardcore music gets across to the listener?
One of the most important aspects of hardcore, and one of those things that truly makes me get into a band is when I actually believe the lyrics. Not necessarily by the word, but the feelings and thoughts projected through them. I hate lazy, uninspired template hardcore lyrics. If it doesn’t mean something, then what’s the point? It’s such a privilege to be able have an outlet like this, and it’s a shame to see so many people just wasting it by writing complete nonsense meant to sound cool and hard or whatever their chosen output might require. If you don’t have anything to say, step aside, swallow your ego and let someone else do it. So to answer your question, authenticity is what I think is the most important thing for a hardcore band to get across to the listener. Regardless if it’s about politics, emotions or whatever it may be.

Why’d you name the album Into The Furnace?
We had a couple of titles in mind for the record. We settled on into the furnace because we felt it summarized the vibe of the songs, both lyrically and musically.

Musically these new tracks sound massively powerful. What were the main influences when writing these tunes?
The tracks are mostly influenced by nyhc classics like cro-mags, leeway, killing time aswell as more metallic acts, biohazard, life of agony, merauder to name a few.

How did you hook up with Quality Control HQ for the 7” release?
Ola came up to us after a show in rastatt, germany to buy a t-shirt and said she really liked the songs we played. We had some demo recordings for the 7" and after sending her those, we started discussing working together. QCHQ is one of the currently hardest working labels in europe and working with Ola has been a pleasure, as she puts a lot of time, effort and involvement into making the releases as good as possible.

Tell us what’s the scene like out there in Sweden at the moment? In terms of music and kids’ attitude, do you feel like it is in a good place today?
I feel like there are a lot of swedish bands taking their music and hardcore very seriously right now, and it shows. I can’t remember the last time we had these many active (and good) bands in all different tiers of hardcore. There’s a lot of people traveling to shows within our nation and abroad, which is very cool. But I also feel like the scene has become more and more centered around the three biggest cities, which is a shame. Existence is 3/5 migrated hillbillies. But yeah, overall swedish hardcore is definitely in a good place right now and I’m excited to see what the future holds.

Swedish bands and scene tend to be very much into politics, even more than in some other parts of Europe. Where do you think it’s coming from?
Sweden is a very progressive country and I guess it reflects in the culture we produce. The most violent and radical nazi organisation we have here, still thinks people should be allowed to be gay. Our most conservative politicians in the parliament, still picks hillary clinton over trump etc. Hardcore in Sweden has for as far I know been strongly connected to the autonomous left wing movement as well as the animals rights movement, even if that particular part isn’t as prominent today as it was in the 90’s. I guess our ”default” is just a lite more to the left than most others.

Tell something about Existence for those unfamiliar. How and when did the band get started?
We started as a band in the summer of 2016. We had a few people coming and going before we set out to record the demo released on neutral words records. The demo was recorded as a four piece but as the songs were written with two guitar players in mind, we joined forces with simon, and the line-up was complete.

What the future holds for Existence?
We are hungry for playing more shows around europe and the uk and some are already in the plans. Meanwhile we are writing new tracks for upcoming releases.