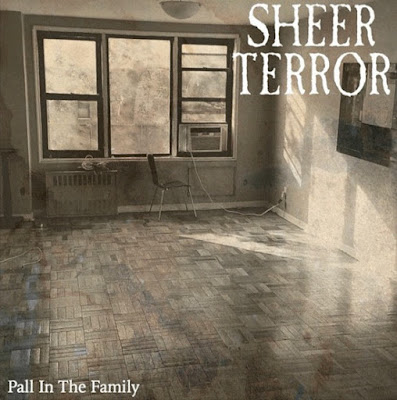 Man, you can’t teach that stuff! I have zero expectations for new albums by bands older than myself but turns out Sheer Terror can still distill their gritty NY style into a killer record. Pall In The Family takes the golden era of hardcore / punk / crossover music, twists it all up and makes it relevant for modern times. I shit you not, it is about as close as a return to form you will get from the band. The record has some of the same emotional impact as their prime material, and the music on here is dope as shit.

If you know Sheer Terror you know Paul is a certified maniac. This guy got no respect for nothing or nobody. Yet, there’s no faking the funk. Part of his genius is because how he’s so down-to-earth in his delivery and subject matter. It's hatecore at its best but these dudes don't walk around like criminals or flex like big gorillas. Paul takes everyday life and puts it to a song and makes it sound deep and interesting. The lyrics are super big on attitude but even if he’s making a joke, you can really feel both the pain and irony in his voice. Take for example The Moon's Gone Out, the first track on the album, which deals with divorce and women who don’t act civilized. Females can bring out the best and worst in men and you get both in one song. Another highlight is Get Me Off This Rock where Paul trades verses with Choke, which is a match made in hardcore heaven.

Like I said, Pall In The Family is much better than expected given all the hype. Great songwriting and solid delivery from the band while Paul proves he still got it. This record should not only be relevant to old timers but a ride for everyone.