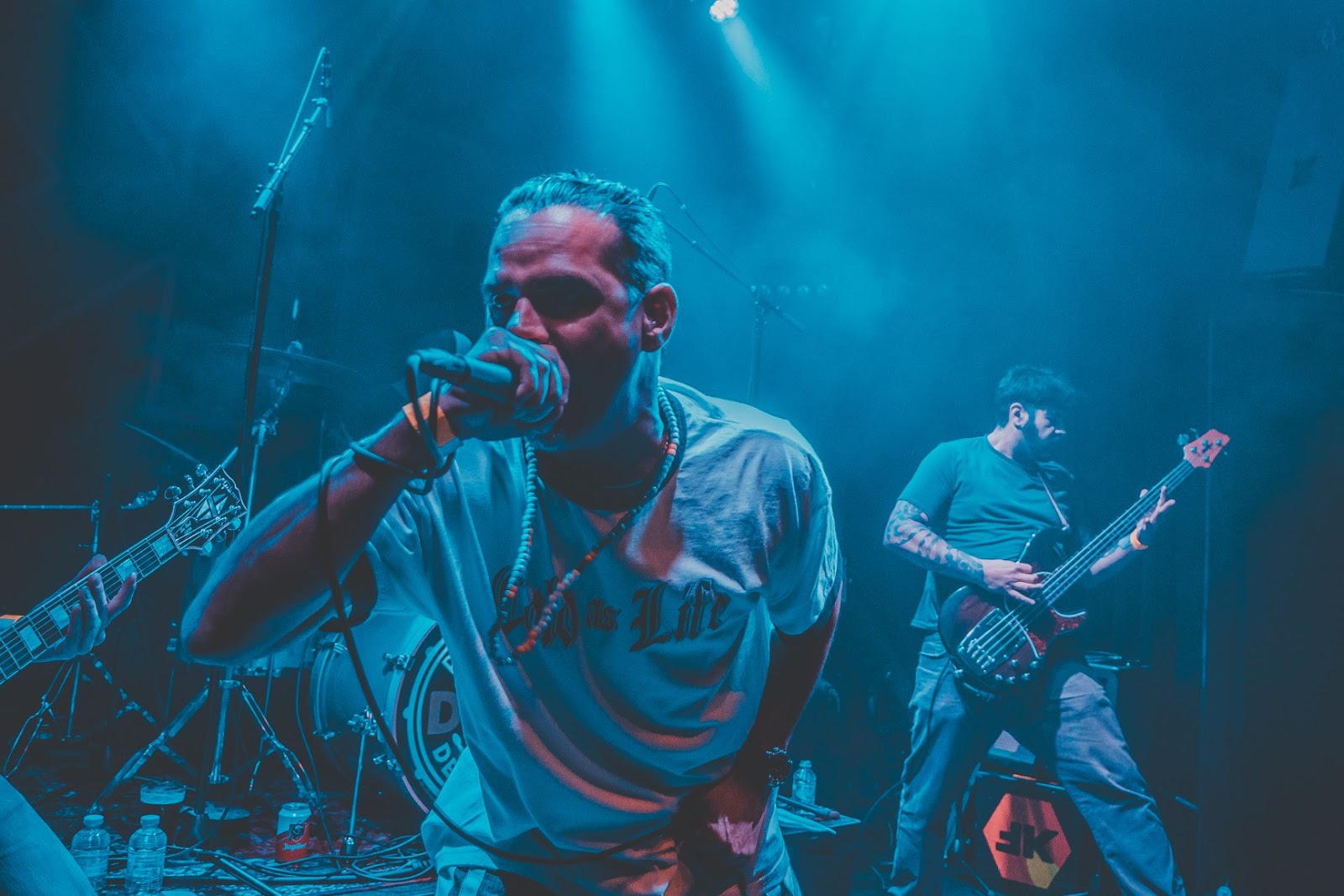 Bounce Back album by Belgium's Cold Stare was a solid slice of NYHC influenced hardcore with lyrics anyone could latch onto. Part serious and grimy, part positive and uplifting, the themes on the album are deeply rooted in an attitude where loyalty and self respect are always front and center. For people raised on healthy dose of Backfire! or Rykers the album delivers all the tropes a starved eurocore junkie could possibly want. If you're in that group I suggest get familiar with Cold Stare, starting from the interview with band's vocalist Philippe

For the kids who may not know who you are, can you introduce the band and tell us where you are from?
Thanks for reaching out & doing this interview! COLDSTARE originates from Antwerp/Belgium. The line-up is Willy on guitar, Javier plays bass and Glenn ‘Lappy’ is our drummer. Glenn is our original drummer. He rejoined the band end 2017. I’m Philippe doing vocals.

Your recent album Bounce Back came out just recently. For those who were too lazy to check it out, what they should expect from it?
Hell yeah! It’s released by WTF Records. Ask your local hc dealer, get it from WTF Records & Distro or directly from (bandcamp) , worldwide shipping available.

„Bounce Back“ is a very diverse album. You’ll get in-your-face fast oldschool hardcore alternated with up-tempo songs, grooves, breakdowns, singalongs, two-step parts, some more bouncy hip-hop influences, some metal parts, punk songs… You know, we all mix it up. That’s what sets us apart from a lot of other bands. We play a melting pot of styles.

Oldschool hardcore stays the backbone of every song. Most important to us is a good song structure. We try to avoid milking out the same riff or break all over again. 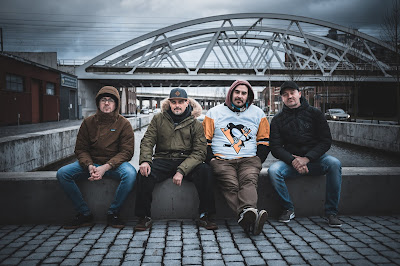 Bounce Back is a rad name for a record, what does it mean to you?
“Bounce Back” refers to resilience. In life you suffer setbacks sooner or later, but it comes down to how you respond, react and deal with those setbacks.

If you touch rock bottom, deal with it, take your time to get up and to become a better version of yourself. Push forward and don’t let it bother you too much. Everybody gets his/her cross to bear.

Do you think it’s important for a hardcore band to have a message behind the music? What are the key points you want listeners to get from your lyrics?
That’s what hardcore is alla bout, man: spreading a message!
But, hey, nobody wants to be told how to live his/her life. I hate that shit… I don’t dig any dogmatic speeches. My lyrical input varies from everyday experiences, personal introspection, the hardcore scene, inspiring events, life’s disillusions,…

My lyrics deal with showing leadership, taking your responsability. If there are things going wrong in your life : name them, face it. Don’t ruin your life complaining all the time. Tackle problems, get organized, push forward and take it one step at a time. Don’t leave a mess, it will get back to you some day or an other. You win some, you lose some. That’s how it goes in life.

I learned that, in the long run, hard work pays off. There are no shortcuts. Good things are not supposed to come easy. I believe that, in order to achieve something in life, you basically have to go through some stages first. Some kind of an inner process if you want. Then you’ll get the reward.

Do you have any hardcore quotables that you live by? Any song lyrics ever touched you?
Karma is a bitch, if you live by the gun, you die by the gun.
Stand your ground in a respectful way and speak your mind.

Prior to Bounce Back, what are your previous releases?
In 2016 we recorded the EP – “Talk Is Cheap”, released on the German label OTHC Records, (formerly known as Bruised Not Broken Records). It was received very well and resulted in a lot of cool shows. We got a lot of good reactions, both from the oldschool guys as from newer kids.

We have been on a hiatus for a long time due to other priorities like jobs, building/rebuilding houses, kids, other musical projects...

COLDSTARE was established in 2001. We recorded our first demo and played a lot of shows in Belgium. In 2005 we recorded an MCD and we kept playing until somewhere 2007, I think.

Mid 2015, we all went together to a Madball show. It was a great night with lots of beer and we decided to get the gears rolling again. So we picked up where we left and here are we now.

There is a strong NYHC vibe in your music. What bands have influenced you the most?
We kind of pay respect to the roots of the music we grew up with. We are heavily influenced by New York, east coast & clevo hardcore. I’d say Breakdown, Killing Time/Raw Deal, Judge, Crown Of Thornz, District 9, Inhuman, Skarhead, Negative Approach, Agnostic Front, Cro-Mags, Madball, Warzone, Leeway, No Redeeming Social Value, The Spudmonsters, Ringworm and a whole bunch more!

Hardcore is more than music, so beside the music, what are some of the aspects of this lifestyle that appeal to you?
Yeah man, hardcore IS more than music. It definitely is a way of life. It’s all about a positive outlet, togetherness, friendship, loyalty, having a good time… Hardcore helped us through difficult periods in our lives and continues to give us great times with a lot of friends and new faces.

It is kind of a therapy to get everyday frustrations off your chest. Hardcore is an outlet, instead of losing the tracks : mosh it up!! 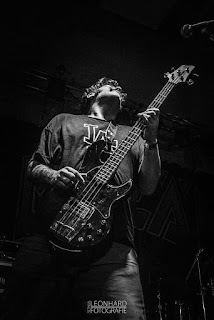 What do you do outside of Coldstare? Is running band hard when you have to deal with other bullshit like work, school, girlfriends etc?
I have a day job and a wife and 2 kids (2 boys) from 5 and 7 years old. Not always easy to combine all of this, but we make it work.

I thank my wife for supporting me and for managing lots of household stuff, so that I can spend time on the band and play mad shows. And the boys love hardcore: they have good taste. They prefer Sick Of It All and Madball.

Shout outs to the local scene: what are other bands from your area you support?
Shout out to WTF Records, Get Some, From The Heart, Spider Crew, Fists Of Time, Only Attitude Counts, Stay In Conflicy, Miozän, By A Storm, Foxglove, Reverse The Flow, SmokeBomb, Five Across, World Negartion, Manifestation, Apparition, Die My Demon, Failed State and last but not least Los Babas Worldwide. Damn, way too many bands and people to mention : you know who you are!! Thank you for your support and anyone who bought our album! And thank YOU for reading this interview.

What’s next for Coldstare?
We plan to get on a European tour end 2019. We have a whole bunch of new songs on the shelf to finish off. We want to play as much shows, weekenders and tours as possible.
Try to get on some festivals. We’ll be featuring on some cool worldwide compilations… and record more songs in the future.
Lots of good things… Hardcore For Live!!