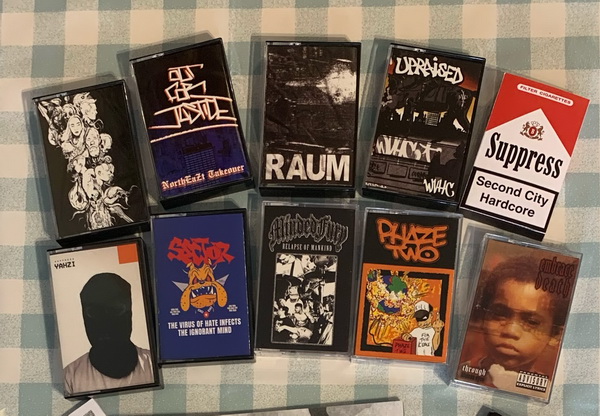 Mentally Vexed has been steadily dropping quality hardcore tapes for the last couple of months. For a label that started as a way to pass time during the lockdown, putting out 10 quality releases in a year demands respect. The operation is ran by four hardcore dudes dodging authorities and violating all the pandemic rules to give you the best in current hardcore. This only shows what few motivated individuals can accomplish if they put their minds to it. Who dates wins!

A full blown interview is coming soon, in the meantime here's a list of label's releases to date with commentary from one the label bosses - Alec.

MVR001 - Suppress - Yahzi.
The band that me and Jack MVR play in, it never got a physical release when it came out in 2018 so we decided to put this out in the run up to a new release. The new release still isn't out nearly a year later haha. This one didn't have and tape labels and we also don't really know how many are out there - I think it's about 30. We got more organised after this..
MVR002 - Sector - The Virus Of Hate Infects The Ignorant Mind.
I was just listening to Sector and realised they hadn't had any kind of physicals in the UK, despite the scene being mega into them. I messaged them and Anchit (guitar) replied saying he'd love to do it - they were super easy to work with and are a great band. Aesthetically, this is the release I'm most proud of so far.
MVR003 - Minded Fury - Relapse of Mankind.
I was on a bit of a H8000 kick, and again just decided to message the band asking if they wanted a UK release. If we ever move into putting shows on, I'd love to have these guys over here.
MVR004 - Phaze Two - For The Core.
Phaze Two are from Birmingham UK, same as us, and we are friends with the band. This was one of my favourite local releases so it was a real pleasure when this came together. I really loved this EP, it's almost exclusively fast riffs and mosh riffs.
MVR005 - Embrace Death - Through Lifeless Eyes.
My other band Mantlet played a show in October-ish 2019 with Embrace Death, and we kept in touch since then, they're fun guys and play a nasty Irate cover. This was a co-release with our friends in Nuclear Family records, who did the standard artwork. Jack MVR put together this NAS rip as an alternative artwork for our version and even though I'm biased, I still think it's the best rip I've seen to date.
MVR006 - Infraction - The Black Room.
This was Infraction's second EP, and I was amazed at how they managed to get it sounding so tough as a home recording, especially as they all recorded their parts seperately from each other. This EP is thematically very dark and metallic, and John's vocals really stand out to me - so much, that I asked him to do a guest vocal feature on the new Mantlet EP (which will be out real soon!).
MVR007 - Out For Justice - NorthEazt Takeover.
The band pretty much gave us free reign to do what we wanted aesthetically, so Ash MVR (an incredible tattoo artist and illustrator) wrote out the track-list and credits in a handstyle similar to the band's logo, and it looked fucking incredible. When I sent the band their personal copies, guitarist Lumpy (also of Daze) was so stoked that he basically said "hit me up if you wanna do any of my stuff in the UK". We're taking him up on that, more info soon...
MVR008 - RAUM - Demo.
The only "punk" record on the list, this was a lockdown project by our friend Jake from Cruelty - his brother Liam played drums and he did the rest. I really like the aesthetic Jake had for this band, and it's actually influenced the latest issue of the zine a lot. I listen to this record most days, even though it's only on shitty bandcamp which is a pain in the arse.
MVR009 - Upraised - WVHC.
We heard Upraised writing these songs when we turned up for Suppress practice at the same rehearsal space, and knew we had to put them out. We're mates with the band, but realistically I'd have put it out anyway. I did a vocal feature for one of the songs but they decided they liked their vocalist's take on it better so didn't use my tracks - miserable bastards. The artwork for this one was fully designed by Ash MVR, and I think it's his finest work. For a new band, this release has done INCREDIBLY well and I hope to see Upraised on shows as soon as they start again.
MVR010 will be the Suppress promo tape
for the upcoming EP. The songs are touch as fuck and we have something special and DIY planned for the release, keep your eye out for this.