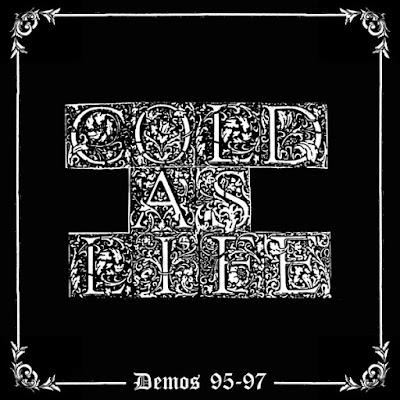 This is the time of making things no one asked for. The vinyl hype means a lot of stuff will be released on wax because there will always be an idiot like me who will buy it. Take this one for example. I can’t find any logic in putting tape demos on vinyl. There were so many other options to make these tracks available to the masses. Brand new tape version? Corny but acceptable. CD? More like it. Vinyl? Only if you do it right. I be most polite about it, but this one fell short of my expectations. Nobody bought it for sound quality values, but outside of music this record itself feels damn cheap. No effort was made about the packaging, my copy didn’t even have any insert, lyrics or any other extra shit. I'm not even mad. I'm mostly confused.

Cold As Life has been a band that I fucks with heavily since when I first discovered them and from then till now all of their stuff never tires me. A living proof that when people with a small budget and not much of a clue but who are driven and angry get together, magic can happen. 95 and 97 demos are the missing link between ‘1988 - 1993’ compilation and Born To Land Hard album. A transition period when Jeff Gunnells took over vocal duties after the original vocalist Rawn Beauty was shot in cold blood in his sleep in 1993 by his roommate Richard Werstine. Luckily they replaced one rage-filled lunatic with another.

Both demos mark the stylistic shift from destructopunk of the Rawn era to heavier metal-tingled hardcore. Born To Land Hard summed up 10 years of writing music and many of the tracks can be traced back to Rawn era. Going through all the band’s demos you can follow the evolution of songs like Terror Zone or Ten 'Till Midnight from the late 80’s over an entire decade to 1999 when the band's massive debut dropped (one of the greatest hardcore albums of all time).

All in all, despite the shady quality of this release, no doubt I would cop this album again, because contrary to mainstream economic theory, consumers don’t make rational decisions.

Bonus: Cold As Life with Rawn singing recorded at Todd's in Detroit, early 90':