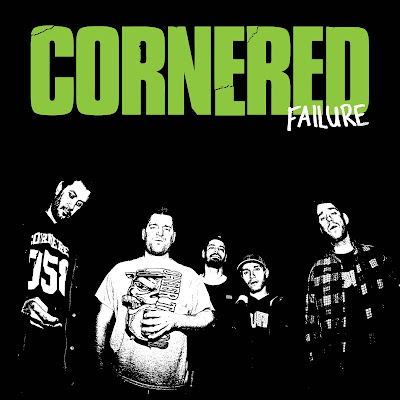 Hardcore is not about bands trying to reinvent themselves every other year. I rather see them focus on sharpening the same formula and just being good at it. Picture Cornered. I could guess what Failure would sound like even before pressing play, but it didn't take anything away from the excitement of finally hearing this stuff. This is nothing that will be new to anyone who has been following the band so far, but the ep is nastily effective. You know what to expect and you get what you paid for.

Clocking in less than 9 minutes in total, there’s no half-ass track on this record. It boils with aggression and infectious energy that is rarely displayed by hardcore bands over a decade in the game. Self-reflecting and almost melancholic Realms of Misery gotta be my favorite track, the creative guitar work gives this one some space while vocalist Niels attacks the lyrics with both anger and frustration. The feeling of failure is something that all of us can experience even more often in the current political and economic situation. The record’s title gives away much of its subject matter and hearing other people going through the same shit as you can be somehow therapeutic.Give it a try.

Speaking of Niels, this man has a real flair for writing smart yet disturbing lyrics, and generally for scaring an audience with his psychopathic and predatory delivery. No doubt he knows his way around some shady corners of the human mind. He sounds like the same voices that whisper to him all these disturbing visions also tell him to beat up random fools for no reason. Do not cross this man!

Like I said, on Failure the band sounds on point and the energy they bring to each track is undeniable. I recommend everyone check it out.