Hardcore straight outta South Africa. If pissed off and hard-hitting tunes and menacing vocals are your thing, don’t sleep on them! The band has already put out couple of eps that you can legally download as they share them for free. If you haven’t done it yet, do it now cause they 100% legit.

Hardcore straight outta South Africa. If pissed off and hard-hitting tunes and menacing vocals are your thing, don’t sleep on them! The band has already put out couple of eps that you can legally download as they share them for free. If you haven’t done it yet, do it now cause they 100% legit.


First of all my congratulations for your new ep “Reality Check”! I definitely think it’s a strong record, but how happy are you with it yourself?

Thanks for the kind words. We're all really stoked with how it came out. We touched on a couple elements that we are wanting to expand on for the next release. My only regret is that we didn't release it as a 7".

Please introduce Conqueror in a few sentences. How did the band start out as a band and who’s idea was it?

Conqueror is a vehicle, an outlet to vent our ups, downs, good times and bad. It started out as a side project originally, with all the members in other bands at the time. Some guys came and went and we only really got stuck into it around November last year. I find South Africa very rigid in terms of whats expected from Punk/Hardcore bands, so our vibe was to ignore the current state of things and just go it alone so to speak.

Obviously the EP is a legit hardcore release, but it also has a slick metallic sound to it. Who would you compare your music to?

Most people find it suprising, but we're all avid Hip Hop fans. So ideas come from all over the place. If i had to try and make a comparison, id say perhaps an Infest / Cro-Mags crossover.

Please tell us a bit more about the lyrics on ”Reality Check”! What kind of issues are you talking about on the ep?

We have 3 dudes in the band that write lyrics, so there isn't a single idea or direction on "Reality Check". Tracks like "Face Eraser"and "Cursed"are very Thrash orientated, where as "Cold World"and "Wasting Time" are a little more serious and more in tune with life in South Africa. The scene over here is very Christian/ Posi in most regards, so we're offering people an alternative.

How do you go about creating your lyrics, do you have a process when writing?

We will work on a song structure, record a video of us playing it in the band room and then take it home so we can all write our own set of lyrics for the track. From there we settle on a preferred direction and work it into a final track. 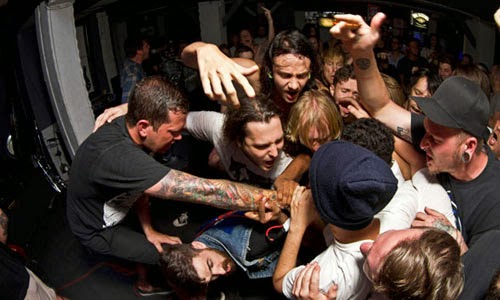 The album got some really cool fat sound that fits so well with the music. Can you tell me about the process of the recording?

We all work day jobs, so we tracked it over the course of 2 months. Its pretty polished up and we tracked our instraments individually. For the next release we're looking to record live and track it all at once. Hopefully capture the essence of a live show.

Tell us something about the hardcore community in South Africa. What is the scene like over there?

The scene is very disjointed over here. Things change a lot from town to town. Durban hardcore is really strong at the moment and the scene in Cape Town is picking up nicely. SA Hardcore is very strong online, but when it comes to shows a lot of kids flake out. I find things over here are very competitive, bands don't support other bands, dudes talk smack about each other. I suppose that happens in every scene. People are slowly starting to see the bigger picture and that hardcore is more about community than personal gain.


Coming from South Africa, how does coming from there shape your attitude to the hardcore music/culture? Do you feel that the fact that it’s so distant from US and Europe has any impact on how you do things over there?

Its definitely a lot harder playing in an underground band over here than it is abroad. Venues are limited and promoters are more interested in the mainstream music genres. Well attended shows usually consist of 20 bands on one day, drink specials, shooters at the door etc.. Things gravitating more towards the "party"than the music. We try distance ourselves from the general SA underground scene and do things as DIY as possible. This means that we play a lot less often but the kids that come to the show are there for the right reasons. Would definitely be keen to head out US/Euro side at some point.

Do you get any feedback from people from other parts of the world?

We've had great feedback from people in the US/Europe/UK and Australia, so its a great feeling to know that people are getting our music one way or another. We need to up our game in terms of mail order and such, but we'll get there.

I guess that for many people the knowledge about South Africa is very limited to things like Apartheid, Nelson Mandela, Oscar Pistorius and so on. What would you say is the biggest misconception about what life looks like in your country?

I think crime is a big misconception. Things definitely aren't as dangerous and violent as people make it out to be. If you walk alone at night down a sketchy alley way in town you're looking for trouble, but that would be the same in London/New York. Its a similar climate and way of life to Australia.

Talking about Pistorius - the guy claimed he slept with a gun under his pillow for protection. I heard some opinions that it’s not unusual in South Africa. Is crime and violence a big issue over there?

Crime is a factor, but you just have to keep your wits about yourself. As i said earlier, its not as bad as people make it out to be.

What do you guys do outside of the band?

Ross works as a tattoo artist, Chris is a graphic designer, Patric is a writer and I (Richard) work as a final mix engineer for TV commercials. Punk as fuck.

So, what does the band have planned for the future?

We're working on our next release currently. Hopefully to be put out late September when we'll be doing a national tour with Betrayal (US) and Truth and Its Burden. Otherwise we're looking to play some shows out of SA and do some traveling.

Anything else you want to say, shouts outs?

Big thanks to everyone who has given us a push or helped out in one way or another. Hardcore Worldwide, Music Connection, Handstyle Tattoos, Favor the Brave. Lastly, a big thanks to Dloogi and Hardboiled for the interview.